Xherdan Shaqiri and Joey Barton set for medical Xherdan Shaqiri is set to undego a medical at Stoke City as he has planned to leave Serie A side Inter Milan.

Xherdan Shaqiri is set to undergo a medical at Stoke City as he planned to leave Serie A side Inter Milan after having a struggling season, according to SkySports. 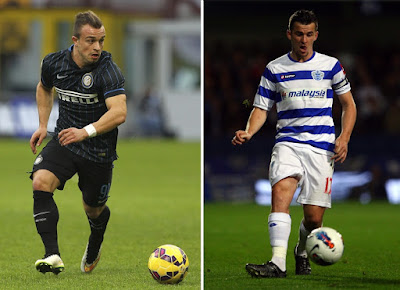 Stoke agreed £12million fee for the former Bayern Munich winger and it is believed that the player who was present in the stands in the first game of the Premier League is set to complete his move as he is currently having a medical.

Shaqiri joined Inter Milan in January and failed to make a name in the Italian league despite of his qualities.
Also See: The Completed Transfer of 2015!

The Potters were interested in signing him before his move to Inter Milan, however the 23-year-old preferred a move to the Italian giants. The Swiss winger is now keen to join the English side.

Stoke boss Mark Hughes said that they are closing on to conclude something.

SkySports believe that the French midfielder has agreed to join the Hammers and will be completing his free move once he passes medical.

The 32-year-old was released by Queens Park Rangers few months ago after their worst season in the Premier League.

Barton who spent a period on loan at Marseille is expected to have a medical tomorrow.