Chelsea set to complete Kenedy move Chelsea are set to announce the signing of Brazilian attacker Kenedy as the young forward finally secured a work permit.

Chelsea are set to announce the signing of Brazilian attacker Kenedy as the young forward finally secured a work permit. 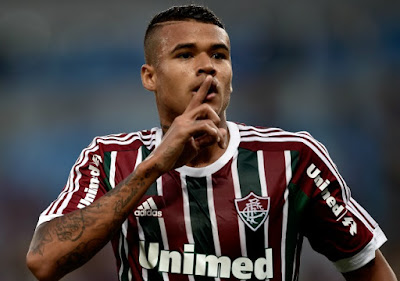 The 19-year-old was captured for a fee around £6.7 million from Fluminense after his impressive displays in the preseason tour. The deal was agreed in June but the work permit remained the reason.

The under 20 Brazil international star started a game against Barcelona and impressed boss Jose Mourinho before being replaced by countryman Willian.

The teenager scored five goals in 42 appearances for Fluminense in the Brazilian league.

Barcelona and Manchester United were also said to be interested in his deal, however the Brazilian players Oscar and Ramires at Stamford Bridge played a great role in convincing him to join the defending Premier League Champions.

Kennedy would definitely have to struggle in order to get a chance in the first team. Diego Costa, Radamel Falcao and Loic Remy are present for the forward role.

Meanwhile, La Liga pundit Guillem Balague has claimed that the London side are also keen to sign Barcelona attacker Pedro.

The 28-year-old has been targeted by both Manchester clubs for the past few months but the Spaniard is still in doubts. Pedro is is expected to join a new club next week, according to reports.