London side Arsenal are keen to sign duo strikers Gonzalo Higuain and Alexandre Lacazette from Napoli and Lyon, respectively. 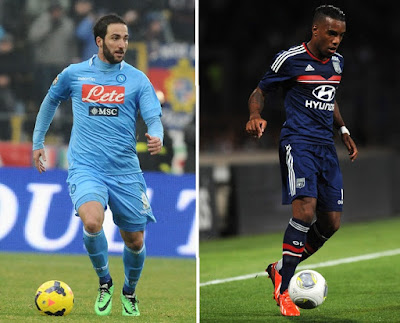 The latest reports from English media have revealed that the Gunners are planning to sign both the talented strikers this summer.

Higuain who has also been linked with Liverpool has already said that he will leave the Serie A side this summer.

While, Napoli chairman Aurelio de Laurentiis has also hinted that he could sell the Argentinean striker. However, the club will not sell him for less than £30million.

Daily Star also added that the 27-year-old is keen to join the North London side and is pushing his club to allow him to leave.

Meanwhile, on the other hand Alexandre Lacazette has been in link with the French boss Arsene Wenger for the past few months.

Wenger is keen to bolster his strike line after the failure of strikers last season. Both Olivier Giroud and Danny Welbeck failed to make an impact last term and Wenger is hoping to seal these both deals.

Lyon coach Hubert Fournier has also admitted that their star player is set to leave the club.

“He is still under contract and the club is the decision maker. At no time have I felt a request to leave from him.”

Chelsea and Liverpool were also interested in the French striker who scored 28 goals in Ligue One last season.