Transfer news 2015: Manchester United are set to seal the two deals of midfielders Morgan Schneiderlin from Southampton and Ilkay Gundogan from Borussia Dortmund.

Manchester United are set to seal the two deals of midfielders Morgan Schneiderlin from Southampton and Ilkay Gundogan from Borussia Dortmund. 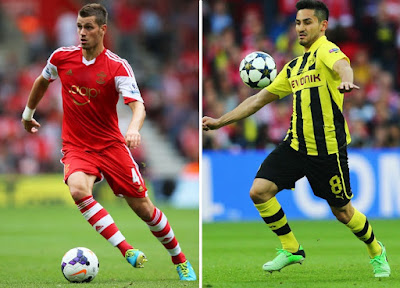 The Metro revealed that Schneiderlin deal has been agreed and the Frenchman will soon be heading for a medical to become the second summer signing. United already have sealed their first summer signing of Memphis Depay from Dutch side PSV last month.

Also Read: Arsenal and Untied to fight for Gonzalo Higuain

The Red Devils have reportedly a £100 million budget to spend this summer and they are likely to bring top new faces to Old Trafford.

Schneiderlin was heavily linked with Arsenal in the past months, it was once reported that the deal has been agreed with Arsenal but now it is Man Untied who are going to end his drama.

Gundogan was also targeted by La Liga Champions Barcelona but the reports reveals that he wants to play for Man United.

These two would be great addition to the squad and with United back in Champions League they are going to help them to bring the old glory days back.