Let’s take a look at the teams in Group C: 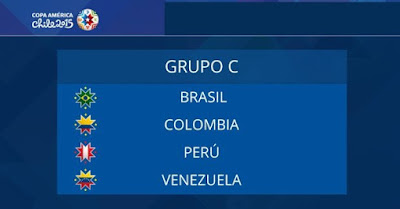 1. Brazil: The Selecao would want to forget that humiliating defeat in the World Cup semi-final to eventual winners Germany last summer and regroup and win this trophy. Regarded as one of the favourites for the Copa America 2015. Dunga back again replacing Scolari after the World Cup would be looking to definitely win something as the Selecao coach, as a trophy has been long overdue for the Brail team. Major injury for the Selecao was Chelsea midfielder Oscar and also Barcelona’s right back Dani Alves getting a late call up to replace Real Madrid’s new signing Danillo. The Brazil coach has made a lot of selection changes since his appointment bringing in a mix of experience and exciting young talent and on paper looks a solid unit. The Selecao are currently ranked 5th in the world.
Coach: Dunga
Captain: Neymar
Players to watch out for: Neymar, Philippe Coutinho and Diego Tardelli
Winners: 8 times (1919, 1922, 1949, 1989, 1997, 1999, 2004, 2007)
Runners Up: 11 times (1921, 1925, 1937, 1945, 1946, 1953, 1957, 1959, 1983, 1991, 1995)

2. Colombia: They captured the hearts of many fans around the world with their flair and enthusiasm at 2014 World Cup in Brazil, only to see them lose out in the quarter-final to host nation Brazil. In that tournament a new star emerged in the name of James Rodriguez whose exploits in the World Cup saw him make a big money move to Spanish giants Real Madrid. Radamel Falcao who missed the World Cup with injury is all set to make up for it by leading his side to winning this trophy. The Colombian had a disastrous season on loan at Manchester United, but whenever called up for the national side the Colombian has been in fine form. The Los Cafeteros are currently ranked fourth in the world the second highest ranking nation in this tournament. Like the Selecao the Colombians are also regarded as one of the favourites to go all the way in this tournament. The Colombians have a lethal strike force with the likes of recent Europa League winner Carlos Bacca of Sevilla and Jackson Martinez of Porto who have been in blistering form for their clubs and also a lot of focus will be on their new talisman James Rodriguez to see if he can replicate the same form he had in the 2014 World Cup.
Coach: Jose Pekerman
Captain: Radamel Falcao
Players to watch out for: James Rodriguez, Radamel Falcao and Juan Cudarado
Winners: 2001
Runners Up: 1975

3. Peru: La Blanquirroja, shocked many in the last Copa America when they reached the semi-finals and lost to eventual winners Uruguay, but managed to secure third place in the tournament. The team has found it hard to replicate its glory in the 70’s failing to qualify for the biggest international tournament the World Cup. The last time Peru took part in the World Cup was way back in 1982. It could be an uphill task for this Peruvian side if they are able to replicate the similar form they displayed in 2011 Copa America, nevertheless this team can cause a few surprises. They face a tough opening match against Brazil and the La Blanquirroja would require to pull a rabbit out of a hat if they are to get something out of this fixture.
Coach: Ricardo Gareca
Captain: Claudio Pizzaro
Players to watch out for: Jefferson Farfan, Claudio Pizzaro and J Vargas
Winners: 2 times (1939, 1975)

4. Venezuela: The only nation in the CONMEBOL side to have never qualified for the World Cup in their history and also not do very well in the Copa America, until 2011 where they recorded their best ever finish reaching the semi-finals and eventually finishing in fourth place which is quite a remarkable feat. They are definitely considered underdogs in this tournament. Under the guidance of head coach Noel Sanvincente who has won many honours as player and coach in the Venezuelan league is capable of taking the La Vinotinto to greater heights. This tournament would be a true test to see if Venezuela have improved from their previous Copa America feat or are they going to crumble.
Coach: Noel Sanvincente
Captain: Juan Arango
Players to watch out for: Salomon Rondon, Juan Arango and R. Vargas
Winners: Never

This group on paper looks pretty much straight forward for Brazil and Colombia to qualify. But judging from last year’s Copa America performances from Peru and Venezuela, it could be a lot tougher than expected. The Peruvians and the Venezuelans will be looking to capitalize and get the three points when both these sides face-off against each other on the 18th of June. The match which can decide which team tops this group would be between Brazil and Colombia on the 17th of June, a must watch game. The Colombians would be looking for revenge as they lost to Brazil in the quarter-finals in the World Cup.