Let’s take a look at the teams in Group B: 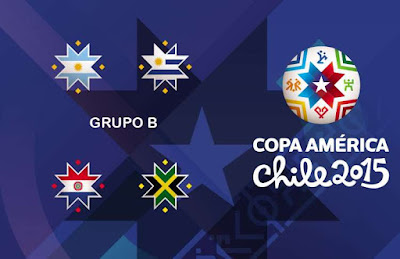 3. Paraguay: La Albirroja will be looking to make amends for not qualifying for the 2014 World Cup in Brazil by putting in a good show in this year’s Copa America. Runner’s up in 2011 edition losing out to Uruguay. Paraguay coach Ramon Diaz is still searching for his first victory as La Albirroja Coach having coached only five games since his appointment in December 2014 and has lost two and drawn three.
Coach: Ramon Diaz
Captain: Roque Santa Cruz
Players to watch out for: Roque Santa Cruz, Lucas Barrios and Pablo Aguilar
Winners: 2 times (1953, 1979)
Runners Up: 6 times (1922, 1929, 1947, 1949, 1963, 2011)

4. Jamaica: First time invitees, it’s definitely a new adventure for the Reggae Boyz. The Underdogs in this group. They are definitely placed in the toughest group but at the same time they would be playing alongside some great names and a great learning experience for the Caribbean team. Jamaica has won the Caribbean Cup an amazing six times the most by any Caribbean nation. But any chance of getting something out of this tournament is highly unlikely. Jamaica coach Winfried Schafer will be looking to add his experience to this vibrant Jamaican side having done the same with his previous coaching role at Cameroon who guided them to the African cup of nation’s glory.
Coach: Winfried Schafer
Captain: Rodolph Austin
Players to watch out for: Garath McCleary, Deshorn Brown and Wes Morgan
Winners: Never (First time entrants)

This group is arguably the toughest group in this competition, the Group of Death most would say. The must see game in this group will be the game between Argentina and Uruguay on the 16th of June. On paper Argentina looks more likely the team to top the group. Also would be interesting to see how the Jamaicans fare against these tough teams.