Here is a detailed review of the Copa America Group A: 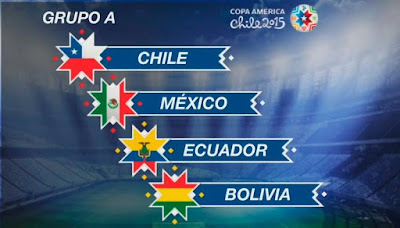 1. Chile: The host nation will be looking to make the most out of home advantage and try to win their maiden Copa America title. With a brilliant showing in the 2014 World Cup reaching the round of sixteen and most noticeably knocking out the former world Champion Spain in their group stage, only to lose out to host nation Brazil. Jorge Sampaoli and his men will be looking to go all the way and would be considered as one of the favorites.
Coach: Jorge Sampaoli
Captain: Claudio Bravo
Players to watch out for: Arturo Vidal, Alexis Sanchez and Claudio Bravo
Winners: Never
Runners Up: 1955, 1956, 1979, 1987

2. Mexico: The nation which comes under the CONCAF umbrella have been regular invitees since 1993 and have made a good impression in this tournament. El Tri suffered a heart-breaking World Cup exit losing out to Netherlands in the round of sixteen narrowly, the side will be looking to make amends and progress further and create upsets along the way. The Mexicans had a disappointing run in the 2011 Copa America losing all there three games in the group stage and scoring just one goal, their worst performance till date in this tournament. The most notable exclusions would be Javier "Chicharito" Hernandez and Giovanni Dos Santos who have not made the final cut in Miguel Herrera’s side.
Coach: Miguel Herrera
Captain: Rafael Marquez
Players to watch out for: Marco Fabian, Raul Jimenez and Rafael Marquez
Winners: Never
Runners Up: 1993, 2001

3. Ecuador: This side have been disappointing in this tournament. The last time Ecuador played in the Copa America, they failed to progress and were knocked out in the group stage. Given the teams they face-off against in their group, they do have a chance of progressing. Ecuador will be without Manchester United winger Antonio Valencia who has sustained an ankle injury leaving him unable to play in this tournament.
Coach: Gustavo Quinteros
Captain: Walter Ayovi
Players to watch out for: Enner Valencia, Jefferson Montero and Miller Bolanos
Winners: Never

4. Bolivia: The last time this South American tasted victory in this tournament was way back in 1963 at home soil. Although they lack the bite and quality to threaten sides, this South American team should not be taken lightly as they have caused a few upsets, and would be looking to do the same in this year’s Copa America. Bolivia is definitely the underdogs in Group A.
Coach: Mauricio Soria
Captain: Ronald Raldes
Players to watch out for: Ronald Raldes, Marcelo Martins Moreno and Martin Smedberg
Winners: 1963

Looking at this group Chile seem favourite’s to top the group. But having said that for the other three they have it in them to create upsets. Teams in this group will be looking at the Mexico squad and thinking to themselves that they have a chance of getting something out of a weak side on paper put out by Mexico coach Miguel Herrera.