Today’s reports have revealed that Arsenal duo Lukas Podolski and Carl Jenkinson are set to leave the club as the agreements has been reached. 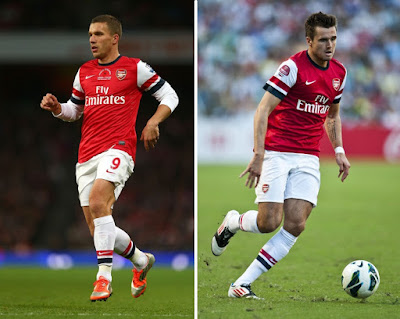 Podolski spent six months of last season at Inter Milan on loan where he failed to make an impact. The German has been eyed by MLS side Orlando City and Turkish side Galatasaray.

The World Cup winner has already told Arsenal boss Arsene Wenger that he will return only if he guarantees regular football.

The Daily Star reported that Galatasaray have reached an agreement for the forward and soon will be landing him on a permanent deal. The fee reported is around only £2million.  Podolski will also have to accept a big wage cut as the Turkish side will not be offering him a deal like Arsenal.

Meanwhile, full-back Carl Jenkinson who has been on West Ham United’s radar is set to leave the Gunners. He spent his last season at West Ham and played decent football.

The Daily Mirror reported that Sunderland have agreed to sign him on a season long loan deal.


Arsenal have no place for Jenkinson at the Emirates Stadium as they already have Mathieu Debuchy and recent season starlet Hector Bellerin. Debuchy however missed due to injuries but the latter one was one of the best youngster in the Premier League.