When Luis Suarez missed a glorious chance to open the scoring for Barcelona early on many Barcelona supporters would have assumed that it was not going to be their day. It took a long time for the home side to respond and it sure was worth the wait. Patience is a virtue and Barcelona certainly showed that by scoring three goals at the latter stages of the game. A brace and an assist from man of the match Lionel Messi and the icing on the cake from Neymar. Bayern Munich had a glorious chance to open the scoring, and also to get an away goal, but they wasted their opportunity and paid the price. Barcelona look like they have one foot already in the final but don’t count on Bayern yet because at home they are destructive. In their last two Champions League games at home, they have scored an astonishing 13 goals.  This certainly wasn’t the return Pep would have envisioned.
Let’s take a look at the talking points in this fixture. 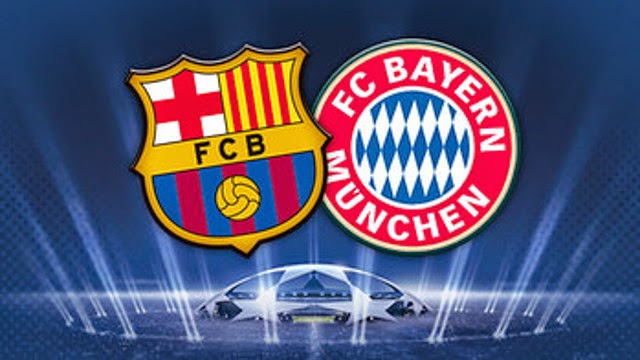 1. Suarez one on one opportunity in the 11th minute: With Barcelona piling the pressure on Bayern’s defence early on with constant attacks, Suarez had a chance to open the scoring for the Catalans when Messi glanced his header towards the striker’s direction who stayed onside and the pass was able to take out the entire Bayern defence leaving Suarez only facing Manuel Neuer, however the Uruguayan striker tried to slot the ball in between the goalkeeper’s legs which was denied superbly by Manuel Neuer. Suarez should have tried to place the ball in the far post, nevertheless a golden opportunity missed.

2. Lewandowski squandered the best chance of the game: In the 11th minute Thomas Muller with a lovely turn was able to take out Mascherano and handed the perfect pass to Lewandowski on a platter only to see the Polish striker miss-kick it horribly. A golden chance for the Bayern striker to not only open the scoring but also to score an away goal. Will that miss come back to haunt Lewandowski and most importantly Bayern Munich?

3. Dani Alves shot produced a stunning save from Neuer: At the latter stages of the first half Andres Iniesta wiped out the entire Bayern defence by playing a delicious lofted pass to Barcelona right back Dani Alves who made a smart run only to see his toe poked shot saved smartly by the German keeper denying Barcelona the opportunity to open the scoring.

4. Messi’s mesmerizing performance: The Argentine was quiet in the first half and started to find his rhythm in the second having a sniff at goal a few times until the 76th minute where scored a trademark left footed goal from long range which beat Manuel Neuer at his near post. Barcelona fans were in for a treat tonight when Messi scored his second, a vintage Messi goal saw him dance his way into the penalty box from a Rakitic pass and embarrass Boateng to score a beautifully weighted lob past Neuer. Messi is now officially the Champions League top scorer with 10 goals in eleven games surpassing Cristiano Ronaldo. If scoring wasn’t enough Messi also provided the assist for Neymar to score a composed one on one finish against Neuer.

5. Pep’s return not so sweet: With all the media hype surrounding Pep Guardiola’s return to Nou Camp to face his former side with whom he had won many trophies, this time around it would be different though trying to beat a side who are formidable at home and he witnessed his side crumble at dying moments of the games by a brilliant Messi performance and also with Neymar potentially adding the nail to the coffin for Bayern Munich's Champions League dreams by scoring the third goal of the game.