The thrilling season has recently ended with thrilling games at the last game week of the Premier League. Chelsea lifted the trophy easily while Liverpool failed to give Steven Gerrard a great last game as they lost 6 – 1 against Stoke City.

FootballNewsGuru have revealed their Premier League Team of the Year for the season 2014-2015. Sergio Aguero and Harry Kane leads the striking force. 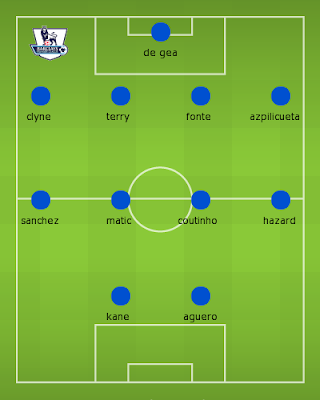 DEFENDERS
Nathaniel Clyne (Southampton)
The 24-year-old attacking full-back showed enough to be on big clubs’ radar including Manchester United for the summer transfer.

John Terry (Chelsea)
Despite of reaching the age of 34, the Englishman was still capable of scoring five important goals for the Blues. He started all the 38 games and won his third title.

César Azpilicueta (Chelsea)
The Spanish full-back played a part for the Champions. He played 28 games and helped his side with three assists.

Nemanja Matic (Chelsea)
Another Champion in the lineup. He was the best holding midfielder of 2014-2105 season.

Philippe Coutinho (Liverpool)
The young Brazilian was not enough to take Liverpool to the Champions League spot but his contribution and goals in the big games were enough to earn the best player award from the club.

Eden Hazard (Chelsea)
PFA Player of the Year not only scored enough but also assisted enough to help his team to win the league. He scored 14 goals and assisted nine.

STRIKER
Sergio Aguero (Manchester City)
Despite of Manchester City’s poor performances this season and his injury problems the Argentinean scored more than 20 goals once again. He wins the golden boot with 26 goals in 33 appearances.

Harry Kane (Tottenham Hotspur)
The young Spurs striker took the Premier League by storm especially in the mid of the season. He scored goals against big sides and won the PFA young player of the year award. He scored 21 goals in 28 starts in the league.