La Liga ended last weekend with Barcelona winning the league title and Real Madrid just finishing second without a trophy. FootballNewsGuru have revealed the below best eleven of 2014-2015 season, featuring majority from Barcelona. 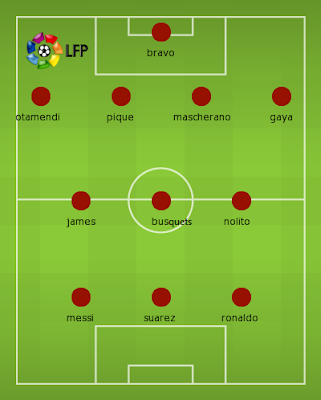 MANAGER
Luis Enrique (Barcelona)
Deserves to manage this lineup. He has a 78% win rate in La Liga for Barca.

GOALKEEPER
Claudio Bravo (Barcelona)
23 clean sheets in La Liga were enough to call him the best keeper of the season.

DEFENDERS
Nicolas Otamendi (Valencia)
Full-back has attracted already several of top clubs by his impressive performances for Valencia in the debut season.

Also Read:
Premier League team of the year 2014-2015
Arsenal Eleven of all time

Gerard Piqué (Barcelona)
Played a vital part in the defence to conceded only 21 goals, the least conceded team.

Javier Mascherano (Barcelona)
Partnership well with Piqué and fulfilled his duty easily and calmly throughout the season. He made 28 appearances.

Jose Luis Gaya (Valencia)
Another Valencia defender who has been on Real Madrid radar for the past few months. He is the youngest player in this lineup. He made 35 appearances.

MIDFIELDERS
James Rodriguez (Real Madrid)
The Real Madrid expensive signing last summer assisted 13 goals for his team in La Liga. Despite of not winning a trophy this season his individual performances were exceptional.

Sergio Busquets (Barcelona)
He is not a goal scoring midfielder neither a regular assist provided but his contribution from his deeper midfield role has proved to be vital for the Catalans.

Nolito (Celta Vigo)
Nolito who won player of the month in the start of recent season was called up for the first time to play for Spain. He is a skillful and fast winger. Scored 13 and assisted 13 goals.

Cristiano Ronaldo (Real Madrid)
Failed to lead his team to the top of the table but was capable of becoming a top scorer once again. He scored 48 and assisted 16 for the Los Blancos.

Luis Suarez (Barcelona)
Despite of the absence in the start of the season and then in the last few games. The striker was enough to make his name in his debut season. He scored 16 goals and assisted 14 times in just 25 La Liga starts.