Arsenal to seal Pedro and Montoya deal North London outfit Arsenal are looking to seal the double deal for Barcelona pair Pedro Rodriguez and Martin Montoya, as per Daily Star.

North London outfit Arsenal are looking to seal the double deal for Barcelona pair Pedro Rodriguez and Martin Montoya, as per Daily Star. 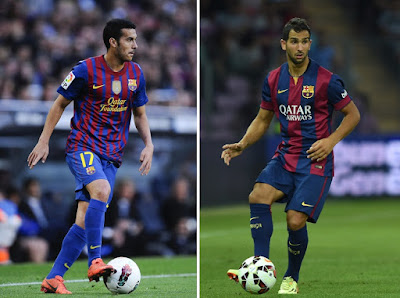 Arsenal boss Arsene Wenger has been targeting Pedro for the last few months as the Spaniard is looking for a move. While the Gunners were interested in Montoya last summer.

Pedro has not been a regular for the Catalans due to the arrival of Luis Suarez from Liverpool last summer. The Uruguayan has been phenomenal for the La Liga Champions.

Pedro’s current contract will end next summer and Barca are in no mood to seal new deal. The player is likely to be allowed to leave the club this summer.

Meanwhile, Barca are working hard on Manchester United target Daniel Alves to keep him for next season. The Brazilian has told that he wants to move to Premier League but the Spanish side are keen to keep him. He will be out of contract this summer.

If Alves signs a new deal then it means that Montoya will be looking for a new club. It is expected that Alves will going to seal a new deal while Montoya will leave the club for regular football. He started only six league games despite of not having an injury.