World Football News and Stuff: Premier League 2014-2015: Team of the 31st week with Chelsea, Manchester United and Arsenal stars featuring from the bpl.

With some fantastic victories, major upsets, brilliant goalkeeping displays and super strikes, let’s take a look at the Premier League team of the week. 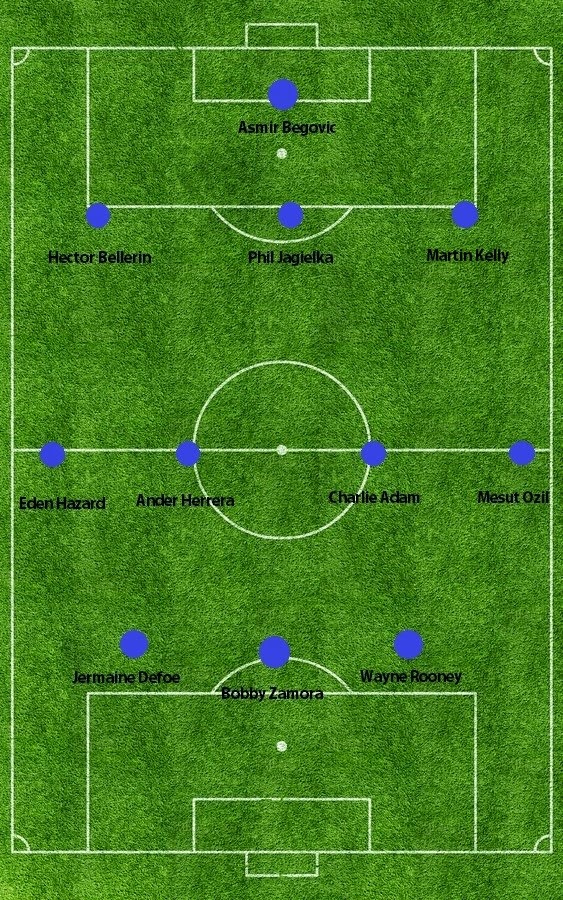 In Goalkeeper we have:
Asmir Begovic of Stoke City who made a string of wonderful saves to keep his team at bay, only for him to make an unfortunate error which resulted in his team’s loss, but nevertheless a stunning goalkeeping display from the Potters shot stopper.

In Defence we have:
Hector Bellerin of Arsenal the young fullback opened the scoring for the Gunners with a sublime curling effort, also conceded a penalty but it was of no harm as Arsenal won the game convincingly and a good defensive display also from the young Spanish fullback.
Phil Jagielka of Everton who scored the winner for the game against European contender’s Southampton, and also giving the Toffees three vital points, and denting Southampton’s hope for Champions League qualification.
Martin Kelly of Crystal Palace, impressive display by the youngster kept his shape in defence and made it difficult for the City players to cross the ball. Cleared the ball with well-timed challenges and headers.

In Midfield we have:
Ander Herrera of Manchester United who scored a wonderful brace against Aston Villa and linked up well with Jaun Mata in midfield, and most importantly keeping Manchester United in contention for a place in Europe next season.
Charlie Adam of Stoke who scored a cracking 65 yarder goal, definitely could win goal of the season. Also a good display by the Stoke player in midfield. Would have been disappointed with his side though for not getting anything out of that fixture.
Mesut Ozil of Arsenal who scored the second goal in the game against Liverpool, a sublime free kick leaving Simon Mignolet helpless, and an inspiring performance from the German midfielder  to produce a Man of the Match performance against the Reds.
Eden Hazard of Chelsea who tore apart the Stoke city defence with his quick feet inside the box as well as outside, too hot for Stoke City players to handle. Scored from the spot kick and also provided the winning goal’s assist to Loic Remy for an easy tap in.

In Attack we have:
Jermaine Defoe of Sunderland who scored a stunning volley in the Tyne-Wear Derby against Newcastle United to not only earn his side a vital three points but also move them away from the relegation zone and also gave new Sunderland boss Dick Advocaat his first Premier League win and most importantly bragging rights against their rivals.
Wayne Rooney of Manchester United who scored a superb volley to seal the win  for United and keep them in contention for the top four or as according to Louis Van Gaal, Mathematically even clinch the Premier League.
Bobby Zamora of QPR who scored a beauty lob goal, a graceful finish against West Brom which sealed the three points for his side and also kept them still fighting, to survive from being relegated to the Championship next season.