A thumping victory by Arsenal over Liverpool who are fighting for the fourth spot to play for Champions League next season. Arsenal also with something to play for, a victory today which they won convincingly, meant that they leapfrogged Manchester City to second place for some time with City not playing till Monday. With Arsenal having won their last five games they were heading into this fixture with confidence while Liverpool had to deal with players' suspensions, injuries and the Raheem Sterling saga. Arsenal getting the better of Liverpool in the last five fixtures these sides have met. This match also swing to Arsenal’s favor. 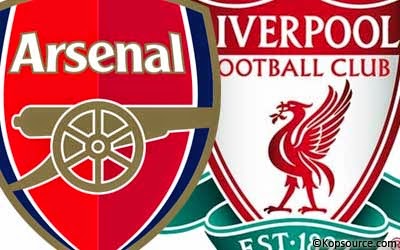 With Liverpool getting a thrashing today it seems that their Champions League dreams might have come to an end, they are now eight points behind Manchester United and with eight games left to play, it might be all over for the Reds. Let’s take a look at the top five major talking points for this exciting game.

Lazar Markovic’s poor pass to Sterling to open the scoring for Liverpool:
With Arsenal dominating the early stages of the match with Liverpool keeper Simon Mignolet having to make two saves in the first five minutes, Liverpool managed to fend off the early onslaught by the Gunners and came so close to open the scoring, when Philippe Coutinho defense splitting pass found an open Markovic who unselfishly tried to pass to Sterling who had an open goal at his eyesight, but the pass form Markovic was poor and thus the chance was lost, this could have changed the outlook of the game if Liverpool would have scored.

Mesut Ozil Sublime Performance:
With Arsenal having scored a goal through Hector Bellerin, the momentum seemed to switch to Arsenal’s favour and with Arsenal being awarded a free kick just minutes after Arsenal’s first goal, Ozil stepped up to take the free kick with Mignolet happy with his wall setup, you could sense the anticipation within the Arsenal supporters, and with referee blowing the whistle Ozil scored a sublime free kick, scoring at the near post of Mignolet who should have done better with his positioning but take nothing away from Ozil’s goal, who recently has been facing a lot of criticism with performances but his performances today was definitely Man of the Match worthy.

Jordan Henderson’s Penalty giving glimmer of hope for Liverpool:
With Arsenal virtually sealing the match in the first half, all they had to do was just keep possession of the ball and see of the game and keep a clean sheet, butin the 74th minute a wonderful run from Sterling in the box outplaying Bellerin with his trickery in turn leading the Arsenal full back to trip the Liverpool midfielder in the box earning a penalty for the Reds, An unnecessary challenge from the Arsenal youngster, and with Henderson scoring from the spot and giving a glimmer of hope to his side to script something special. David Ospina got fingertips to the spot kick but it was a nicely slotted penalty from the Liverpool skipper.

Emre Can Red Card:
With Liverpool having scored and playing a very offensive game with most of their players upfront. All Arsenal had to do was bank on the counter attacks. And in the latter stages of the second half with the Liverpool defense been taken for a ride today, Emre Can with a moment of madness challenging Danny Welbeck from behind and earning himself a second yellow, having received the first yellow card early in the second half for dissent. It was frustration from the Liverpool defender that made him act out in this fashion. Liverpool now have finished their last two games with ten men.

Olivier Giroud adds icing to a wonderful Arsenal performance:
With Arsenal heading to a convincing victory and moving up to second place in the table for the time being. Giroud having won the Barclays player of the month, for him having scored in all games of Arsenal last month, he continued from where he had left off scoring in injury time to rub salt of Liverpool’s wounds, a superb finish from the Frenchman, a left footed strike leaving Mignolet with no chance to save.

With Arsenal picking up wins at the right time, they could challenge Manchester City till the very last day for second spot or maybe even Chelsea for the title with Arsene Wenger playing down the title talk. As far as Liverpool is concerned, it is going to be tough now for them to finish fourth, their UCL dreams might slowly be slipping away from them.