From the lineup it seems that Ronaldinho is a fan of Chelsea football club as he picked three players from the Premier league side. The former Barcelona star did not pick Real Madrid star and current Ballon d’Or holder Cristiano Ronaldo.

The Brazilian star named Lionel Messi and the former Brazilian Ronaldo in the lineup. 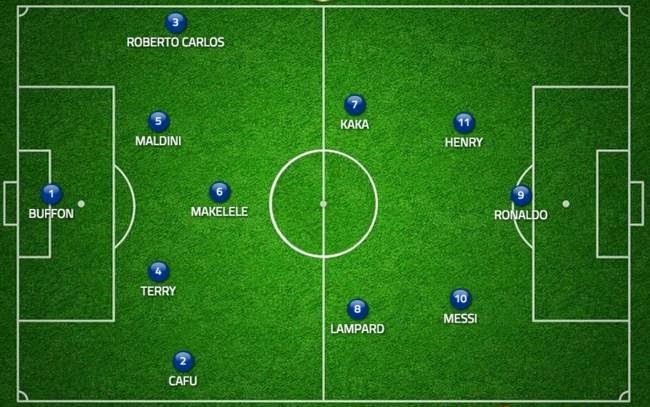 Gianluigi Buffon
Juventus and Italy legend Gianluigi Buffon gets the spot in Ronaldinho's eleven. The 37-year-old is still the best goalkeeper in Serie A.

Cafu
Ronaldinho picked up his former international captain Cafu as the right-back in this lineup.

John Terry
Only two Englishman has been named and one of them is Chelsea captain John Terry. Ronaldinho named him in the lineup because of his impressive performances against Barcelona.

Paulo Maldini:
A versatile defender is named as the other centre-back. Maldini is one of the best defender that football has ever produced.

Roberto Carlos:
His former international team mate but a player from the bitter rivals Real Madrid. Ronaldinho named him as one of the best free kick taker in the world.

Claude Makelele:
Ronaldinho told that when Makelele is playing, his defensive line feel safe as they have a fine defensive midfielder ahead of them. He was so strong and it was easy for him to take the ball.

Frank Lampard:
Another player who is now not a part of Chelsea but his name is remembered because of his Chelsea days. Ronaldinho told that he wanted to play alongside him, he even told boss Frank Rijkaard to sign him but he never wanted to leave Chelsea.

Kaka:
Ronaldinho enjoyed both the club and country days with Kaka. He said that Kaka might have failed in Real Madrid jersey but he must not be forgotten for his AC Milan glory days.

Lionel Messi:
The four time Ballon d’Or winner is being called as the magician by Ronaldinho. The Brazilian played few years before leaving to Milan, but still thinks that he should have played more years with him.
Ronaldinho added: “There are no words to describe him; he just has magic in his feet.”