Confirmed Liverpool Lineups Against Southampton: Liverpool have revealed the lineups for the Premier League game Southampton which will be played later today.

Liverpool have revealed the lineup for the Premier League game against Southampton which will be played later today.

Liverpool Boss Brendan Rodgers has made few changes to his squad, he will go with the same 3-4-3 formation which has brought several positives. 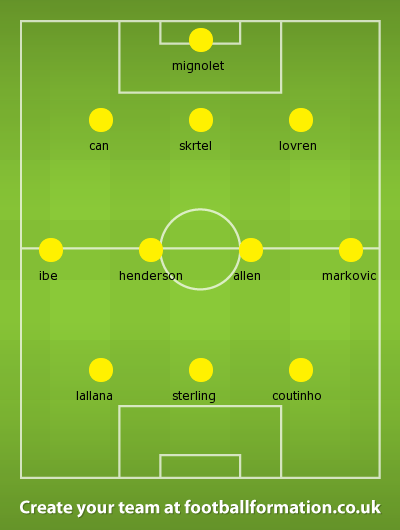 Simon Mignolet remains the first choice keeper with Emre Can and Martin Skrtel keep their defensive role but Mamadou Sakho is replaced by Dejan Lovren. Sakho suffered a minor knock and Rodgers decided not to rush him.

Skipper Steven Gerrard remains out with injury, Joe Allen keep his place along with Captain Jordan Henderson in the centre of midfield.

Youngsters Jordon Ibe and Lazar Markovic start on the wing-back role. Markovic who didn’t feature in a Europa League game earlier this week due to suspension has taken his spot back in the lineup.

Philippe Coutinho and Adam Lallana start behind Raheem Sterling who gets the front seat ahead of Mario Balotelli and Daniel Sturridge.

Mario Balotelli gets the bench despite of scoring match winners in the recent weeks. Full-back Alberto Moreno has been rested along with striker Daniel Sturridge.