Confirmed Lineups Everton vs Liverpool The Lineups for the derby game between Everton and Liverpool have been revealed officially.

The Lineups for the derby game between Everton and Liverpool have been revealed officially. 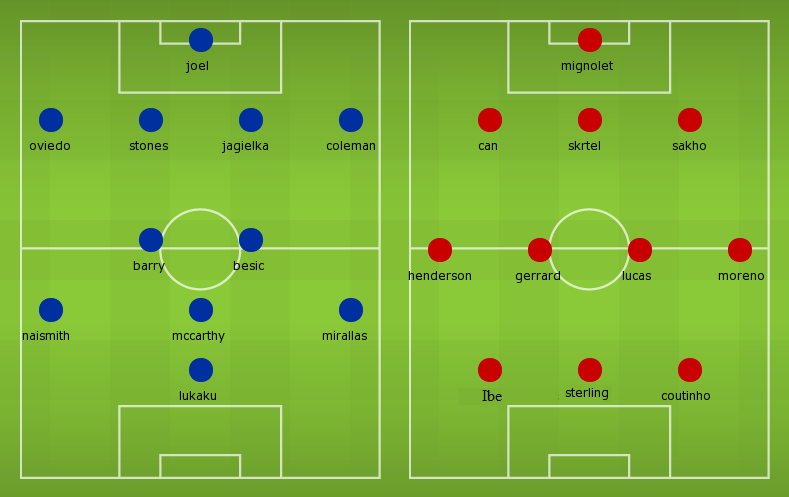 Everton
Roberto Martinez has made two changes in the lineup.
Joel Robles keeps his position at the back with John Stones and Phil Jagielka in the heart of defence. Bryan Oviedo replaces Leighton Baines in the lineup and Seamus Coleman keeps his spot.
Gareth Barry and Muhamed Besic starts once again in the centre of midfield.
Kevin Mirallas and Steven Naismith starts on the flanks with James McCarthy (takes Aiden McGeady’s place) behind lone striker Romelu Lukaku.

Liverpool
Liverpool boss Brendan Rodgers has made few changes to the starting lineup, Steven Gerrard has returned and Jordan Ibe has been given a first start.
Simon Mignolet keeps his position on goal with the same defensive line Emre Can, Martin Skrtel and Mamadou Sakho.
Lazar Markovic has been dropped to make a way for Steven Gerrard who will play his last Merseyside derby. Lucas Levia (takes Joe Allen role) and Gerrard will take the central role with Jordan Henderson from the right and Alberto Moreno from the left.
Philippe Coutinho and Jordan Ibe (inpalce of Adam Lallana) start behind Raheem Sterling in the attack.