Arsenal have named many played in the past that he almost signed current stars including Cristiano Ronaldo and Lionel Messi when they were young, but failed to sign.

Arsenal boss Arsene Wenger has named many players in the past that he almost signed, including current stars Cristiano Ronaldo and Lionel Messi when they were young, but failed, however. 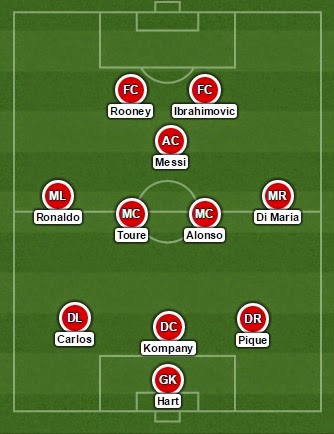 Below is the Arsenal eleven of almost signed players who are now stars.

Joe Hart
Manchester City current first choice keeper Joe Hart is the man was almost signed by Arsenal before becoming a star for the Citizens.

Vincent Kompany
Another Manchester City star and current skipper Vincent Kompany is included in this lineup. Wenger watched him or a long time but failed to sign him in the end.

Roberto Carlos
The former Real Madrid star Roberto Carlos had a dream to play for Gunners but after his Real contract Turkish outfit Fenerbahçe beat the Gunners to land the Brazilian.

Angel Di Maria
Wenger was linked with Angel Di Maria when he was a teenager. Work Permit was likely to be his problem that time.

Xabi Alonso
Xabi Alonso was strongly linked with Arsenal but the Gunners were unable to meet Liverpool demands back in 2008. A year later he moved to Real Madrid for a fee around £30million.

Yaya Toure
This was the mistake that Arsenal made. They failed to seal his move despite of having his brother Kolo Toure in their squad. The Ivorian moved to Moncao then Barcelona and finally is at Manchester City.

Wayne Rooney
Wenger was a big admirer of Wayne Rooney but Sir Alex Ferguson beat him to sign Rooney from Everton, he is now the captain of Manchester United.