London side Arsenal are set to beat Manchester United for highly rated youngster Kevin Mendez, according to Daily Star. 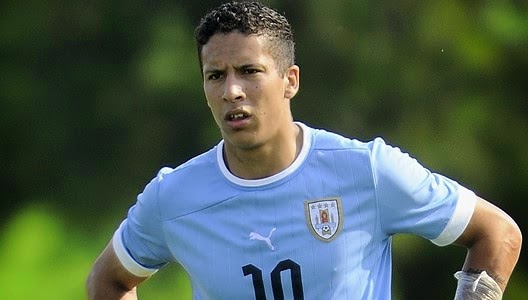 The reports claim that the Gunners’ representatives have contacted the player for the possible move. Arsenal are ready to pay £6million for the new Luis Suarez.

Manchester United manager Louis van Gaal are also in the queue but now reports revealing that Arsenal are likely to seal his deal this month.

The 18-year-old is also likely to prefer Arsenal, as per Tuttomercatoweb. However, the Uruguayan side are likely to delay the move until the summer.

Mendez is a big fan of Barcelona midfielder Andres Iniesta and Arsenal star Mesut Ozil. His desire to play with Ozil can be fulfilled if he joins the Emirates side.

Penarol are expecting a big money move for their so called Luis Suarez. Mendez got attention last year after he scored the two vital goals in the 2013 FIFA under-17 World Cup.

Former Liverpool star Suarez also advised the Reds to sign him after his impressive performances.

Reports have also linked him with the Spanish side Barcelona.