Stoke City and Manchester United have revealed their lineups for the Premier League clash.
arsenal 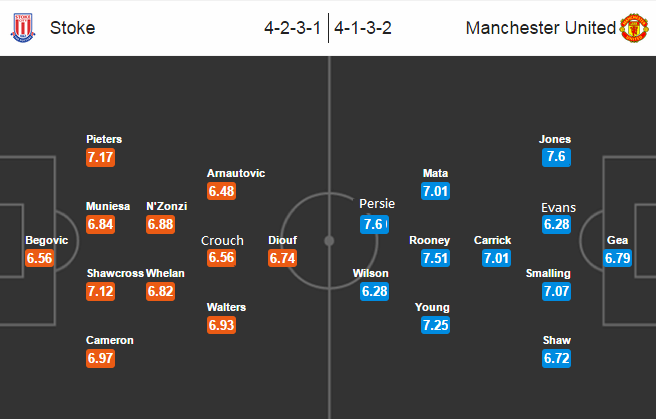 Stoke City
Stoke City start without their star striker Bojan Krkić who was ruled out with an injury. Peter Crouch takes a role inplace of the Spaniard. While former Manchester United striker Mame Biram Diouf starts alone upfront.
John Walters and Marko Arnautović start from the flank while Glenn Whelan and Steven N'Zonzi takes the holding role in front of the skipper Ryan Shawcross and Marc Muniesa. Geoff Cameron starts from the right side of the defence and Erik Pieters from the left.

Manchester United
Robin van Persie continues upfront despite of playing regular games in the past week. Radamel Falcao gets another chance to prove himself in the Premier League.
Juan Mata, Wayne Rooney and Ashley Young start behind the strikers. Michael Carrick to hold the midfield alone.
Luke Shaw gets the start on his favourite left-back role. Chris Smalling and Jonny Evans on the centre of defence with Phil Jones on the right. David de Gea continues in goal.