Confirmed Lineups are given below for the Premier League fixture between Manchester City and Arsenal. 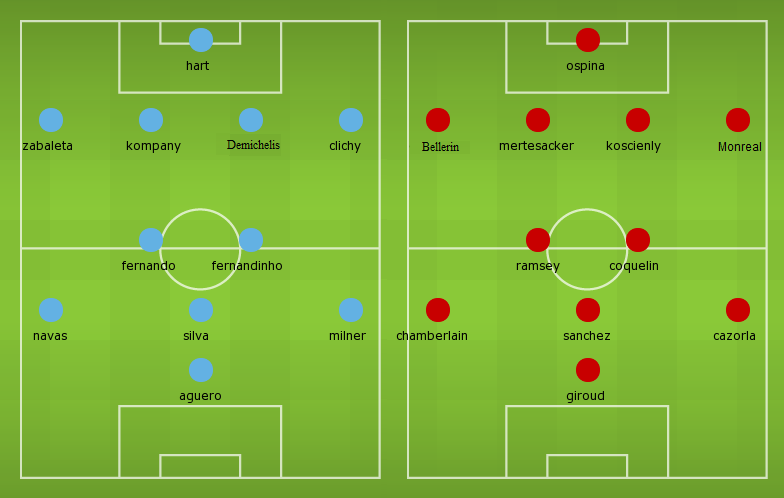 Manchester City
Manchester City welcome back Sergio Aguero who missed last eight games for them. He starts in place of Stevan Jovetic.
David Silva, Jesus Navas keep their place while Samir Nasri had to be dropped out with an injury, James Milner takes his spot.
Fernando and Fernandinho take their role in a defensive midfield asusual.
Eliaquim Mangala got the bench as skipper Vincent Kompany returns from an injury. Martín Demichelis and Gael Clichy takes the rest of the defensive duty.
Joe Hart continues on goal.

Arsenal
David Ospina keeps his role in goal but Mathieu Debuchy suffered an injury and is replaced by Hector Bellerin.
Per Mertesacker and Laurent Koscielny continue at the heart of defence and Nacho Monreal takes his left-back role.
Tomas Rosicky gets the bench as Aaron Ramsey takes his role with Francis Coquelin.
Oxlade-Chamberlain, Santi Cazorla and Alexis Sanchez start in the attacking role and Olivier Giroud takes the front seat.