Former Juventus and Real Madrid midfielder Zinedine Zidane has revealed his World Eleven. Majority are close to the age 30.

Former Juventus and Real Madrid midfielder Zinedine Zidane has revealed his World Eleven. Majority are close to the age 30. 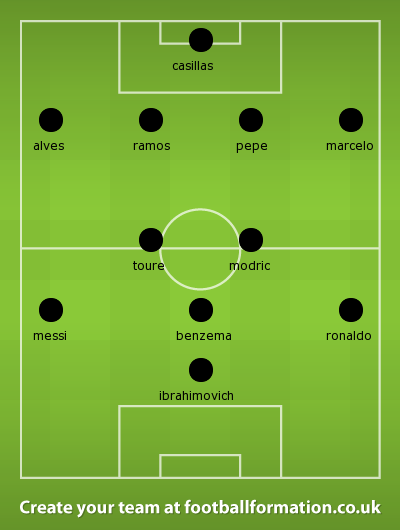 Zidane picked seven players from current Real Madrid side, while two are from Barcelona, one from Premier League side Manchester City and one from Ligue one side Paris Saints Germain.

The Real Madrid B boss did not even pick a single name from Germany which won the World Cup in the summer.

The Frenchman picked Iker Casillas on goal rather than the current best keeper of Bayern Munich Manuel Neuer who will fight for Ballon d’Or against Cristiano Ronaldo and Lionel Messi.

A wonderful defensive line including three Madrid stars Sergio Ramos, Pepe and Marcelo along with their rival Daniel Alves.

Karim Benzema as another striker might be as a second striker. While former Barcelona and current PSG star striker Zlatan Ibrahimovich takes the front seat in the formation.

However, the 42-year-old picked majority from his own side but he also dropped world record player Gareth Bale and summer signing James Rodriguez from his lineup.