Former Chelsea star Salomon Kalou is enjoying yoga with Caley Alyssa in his Christmas break and is hoping to be fully relaxed and fit for the African Cup of Nations which starts next month. 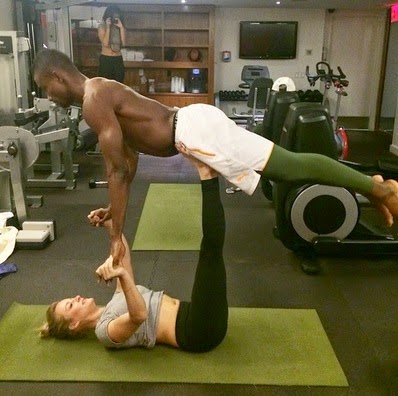 The Ivorian attacker who moved to Hertha Berlin from French side Lilli is making the most of his Bundesliga vacations in New York City.

The 29-yaer-old will already be leaving for his national side to play African Cup of Nations in January.

The former Lille star said that Caley Alyssa is the best yoga teacher as he posted on his Instagram profile.

The African posted: “With the big bro @mike_kalou on that spiritual level... #takingthats*** to the next level with the best yoga teacher in the game @caleyalyssa.”

The former Premier League player is not the first footballer who does the yoga, several footballers including former Aston Villa goalkeeper Brad Friedel and Manchester United coach Ryan Giggs have done it before.

Yoga has done enough for the 43-year-old goalkeeper that he is still capable of playing football. Currently, taking the bench role at Tottenham Hotspurs.

While Ryan Giggs also did yoga before announcing his retirement to remain fit. Also, Liverpool striker Daniel Sturridge is a well-known yogi.