After a thrilling second half of last season and so much ups and downs in the first half of current season, we have lined-up our best Premier League eleven.

The first half of this year include the dramatic game between Manchester City and Liverpool which took the Reds back to top but in the end Manchester City took the title. A sudden change in form of Brendan Rodgers has been seen this season after the departure of Luis Suarez.

While Arsenal manager Arsene Wenger still struggle despite of winning a FA Cup trophy last season. No player from the Gunners gets a name in the lineup.

For Manchester United, Louis van Gaal started from the worst and is set to end 2014 on the third spot in the Premier League.

Find out our Premier League eleven for the year 2014 below. 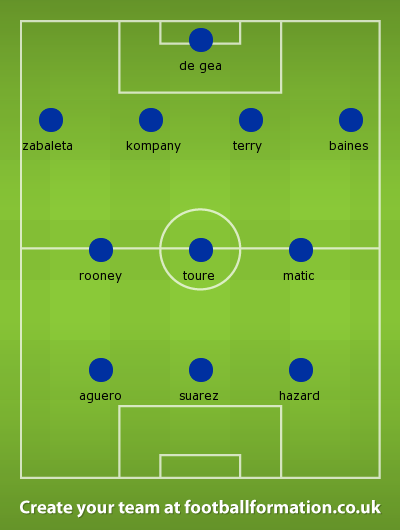 Manchester United stopper David de Gea is now proving himself in the Premier League after a disastrous first season at Old Trafford. He has saved United so many times this term.

Pablo Zabaleta
Manchester City right-back Pablo Zabaleta is loved by his teammates, officials and the fans not only for his personality but also for his qualities on the field.

John Terry
Chelsea centre-back who is nearing his ending years remains a top defender in the Premier League. Jose Mourinho might have regretted after Frank Lampard’s departure but will not do the same mistake for Terry.

Leighton Baines
Everton full-back is one of the best left-back in the Premier League. He not only fulfils his positional duties but also scores from free-kicks and spot kicks.

Yaya Toure
Manchester City powerhouse was the most important player for the Citizens last year. He led them to the Premier League title.

Nemanja Matic
Chelsea midfielder has become one of the most influential players for the Blues since his move. He has taken the control of the midfield.

Wayne Rooney
Manchester United skipper scored 24 goals this year, he also became the captain for both club and country which is a big achievement for the scouser.

Luis Suarez
Suarez five months at Liverpool in the Premier League this year were enough to name him in the BPL IX. His outstanding performances played a key role in Liverpool title challenge.

Sergio Aguero
Manchester City striker Sergio Aguero still makes the list despite of having most of his time away from the field with injuries. He is the top scorer with 14 goals in the Premier League so far this season.

Do you agree?
Have your say below.