Injury Update and Predicted Arsenal line up against Galatasaray

Arsenal will play their last Champions League group game against Turkish side Galatasaray tomorrow. The Gunners have already secured the spot for the next round but are eyeing to end the group stage as the leaders. 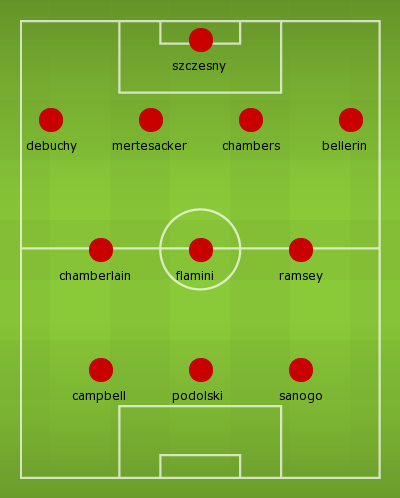 David Hyter who is a journalist in Guardian newspaper attended the press conference and revealed the starting lineup on his twitter account. The good news for Arsenal fans is that Mathieu Debuchy is likely to get a start as he returns from his injury.

Full-back Debuchy who returned to training last month is now fully fit according to Arsene Wenger.

Hector Bellerin could start from the left side as Debuchy will take his favourite role from the right side of defence. Calum Chambers and Per Mertesacker will be present at the heart of defence.

Arsenal boss Arsene Wenger has already told that Alexis Sanchez and Laurent Koscielny will not travel to Turkey as they need rest. But it also looks like majority of first team players will not visit including midfielder Santi Cazorla, defender Kieran Gibbs, strikers Olivier Giroud and Danny Welbeck.

Mathieu Flamini, Aaron Ramsey and Alex Oxlade-Chamberlain all are set to take their role in the midfield.

Joel Campbell and Lukas Podolski who both are eyeing for a move in January are likely to get a start with Yaya Sanogo upfront.

Meanwhile, Theo Walcott could be facing a surgery on his groin problem which he suffered last month. Also, Jack Wilshere could miss another month with his ankle injury.