Eden Hazard has picked his best eleven for EA Sports video game FIFA 15 Ultimate Team. The Belgian chose many French players as he revealed that he was a fan of France national team when he was young. 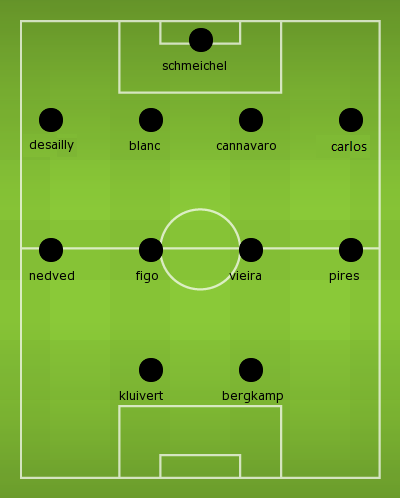 Premier League star picked a simple 4-4-2 formation for his Ultimate team. He picked three Arsenal players from the invincible squad.

The Chelsea star picked Roberto Carlos as a left-back, Laurent Blanc and Ballon d’Or winner Fabian Cannavaro on the heart of defence and from right Marcel Desailly.

While for strikers, former Barcelona striker Patrick Kluivert upfront with another Gunner Dennis Bergkamp who was regarded as So Classy by Hazard.

Watch the video below:

Hazard did not choose any player from his current side Chelsea which might raise some eyebrows, he picked Arsenal stars which indicate that he was a fan of Arsenal.