Arsenal and West ham have revealed their lineups for today’s Premier League clash. 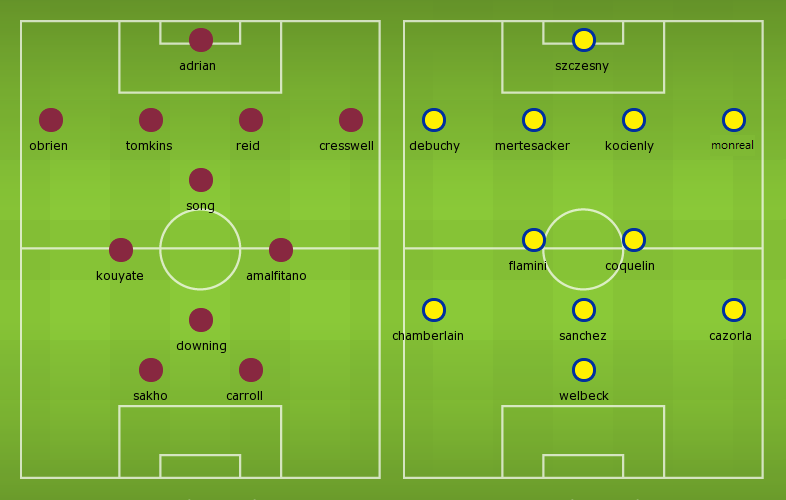 West Ham
West ham start with a different lineup but with the same formation.
Adrian keeps his role at the goal while Joey O'Brien and James Tomkins takes the starting spot along with Winston Reid and Aaron Cresswell in the defence.
Alex Song starts with Cheikhou Kouyate and Morgan Amalfitano in the midfield. While Stewart Downing starts behind the two strikers Diafra Sakho and Andy Carroll.

All senior players Jaaskelainen, Noble, Nolan and Cole are on the bench.

Arsenal
Arsenal manager Arsene Wenger starts with Laurent Koscielny and Nacho Monreal in the defence. Per Mertesacker at the centre of defence and Mathieu Debuchy takes his favourite right-back role.
Mathieu Flamini starts in the midfield along with Francis Coquelin. Chamberlain from the right side and Santi Cazorla from the left. While star player Alexis Sanchez starts behind striker Danny Welbeck.

Podolski who has scored four goals against the Hammers is on the bench along with Walcott who returns from injury.