France is another top talented country in terms of football. Below are the top ten expensive Frecnh transfers. Real Madrid once again dominate the list with four big moves including the top talent of Zinedine Zindane. 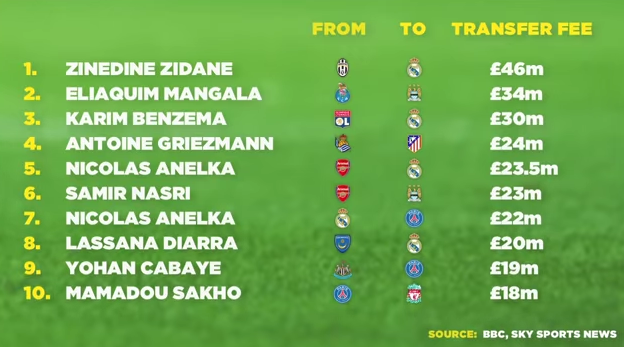 10. Mamadou Sakho
Liverpool signed the French center-back from Paris Saints Germain for a fee of £18million in 2013.

8. Lassana Diarra
The Spanish giants Real Madrid paid £20million to Portsmouth for the defensive midfielder in 2008.

6. Samir Nasri
Nasri left Arsenal after playing four seasons for Manchester City who paid £23.5million to the Gunners in 2011.

5. Nicolas Anelka
Los Blancos paid £23.5million to the London side Arsenal for their striker Anelka in 1999.