Why footballers suffer back to back injuries?

Players that are consistently injured and struggle to play regular football need to point the finger at their clubs for their problems.

Not all blame can be put onto the clubs but the majority of it is on the shoulders on the manager and medical team.

Below are the three Premier League players who are suffering from back to back injuries.

Liverpool striker Daniel Sturridge has been injured since August. He was set to return in October yet he suffered a calf strain. He was then to return after the international break yet he has suffered yet another injury.

Newcastle United defender Ryan Taylor has had in incredibly unlucky career. After suffering an injury to his anterior cruciate ligament in 2012 and spending eight long months on the sidelines he suffered another injury to the same knee in April 2013. Now he just returned from injury, but unfortunately he had to be substituted against QPR yesterday where he left the pitch in tears. 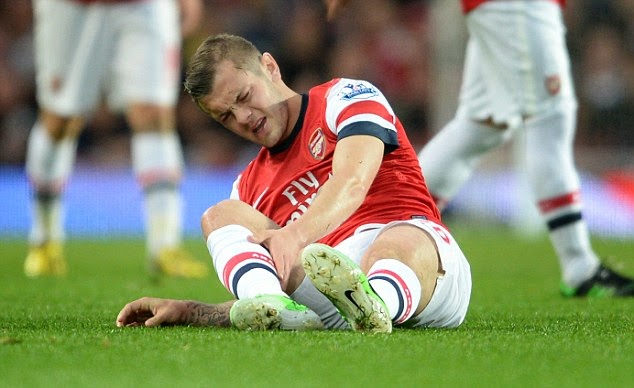 Arsenal midfielder Jack Wilshere is another player whose career has been consistently hampered by injury. He has missed 14 months of football due to injuries just on his right ankle.

So why are the managers and medical team to blame?

Just these three playeprrs have been consistently injured on their road to recovery. So either the manager is rushing his players back too early or the medical staff aren’t doing their jobs properly.

I’m not inferring the mangers are putting their players in danger but with the amount of technology in the game they should be aware when a player isn’t ready to return.

Sir Alex Ferguson had the same issues with Ryan Giggs with his hamstring and Rio Ferdinand with his back during his time at Manchester United.

Yet what Ferguson did and no other manager seems to be doing is working with the player and the medical staff to create a programme to allow the player to get back playing football.
The United physio at the time brought in a yoga instructor and Giggs’s problems were solved. He went on to have an extremely prolonged and successful season.

Rio Ferdinand couldn’t seem to get over his back problems in 2010. Yet Ferguson worked with the medical staff and created a new training regime for him so he could get back to fitness. He went on to play 35 games in the title winning season of 11/12.

Managers need to liaise with the medical staff to create special programmes in order to get their players playing again.

Too many players are suffering setbacks on their return from injuries. They need to be given adequate time to recover even if takes slightly longer than first thought.