FIFA have announced the top ten goals which are nominated for the FIFA Puskás Award 2014. The Goals are from World Cup, Premier League, La Liga, MLS, etc. FIFA have added all the goals on their official YouTube channel.

The big surprise is that Cristiano Ronaldo, Lionel Messi, Gareth Bale, Neymar and Luis Suarez all failed to be a part of this nominations. 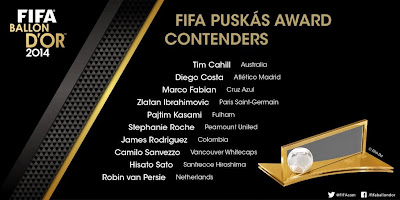 Watch all the ten goals below:

Tim Cahill scored a wonderful goal against Netherlands in the World Cup while representing his country Australia on 18th June, 2014.