Few day ago, journalist of Dutch paper AD took some extra time to reveal their Fathers and Sons best possible lineups that could feature against each other someday.

AD reporters picked their favourite eleven former star players to make a father’s side and came up with their sons to make a Sons XI. 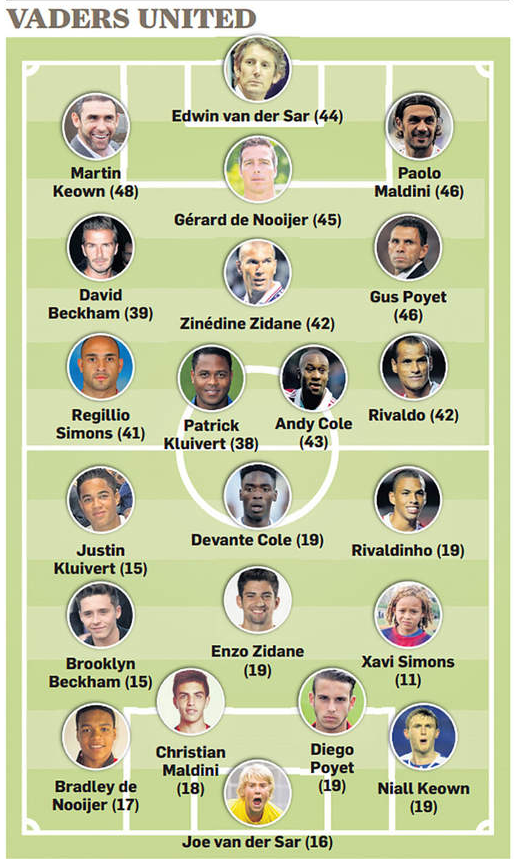 Goalkeeper van der Sar is on both sides one is aged 44 and other is 16. The Defence line starts with right-back Martin Keown (48) with his son Niall Keown featuring on the same role for the Son’s eleven. Gerard de Nooijer (45) hold the central role while his son Bradley de Nooijer (17) is on left side. Paolo Maldini (46) starts from the left but his son Christian Maldini from the centre (18). Digeo Poyet, 19, is another centre-back in the Son’s eleven and his father Gus Poyet is on the left side of the midfield.

Zinedine (42) and Enzo (19) Zidane both on the same attacking role for their teams along with David (39) Beckham and Brooklyn (15) on the flanks.

Regillio Simons (41) and his son Xavi Simons (11, the youngest among all) starts from the right side.

Patrick (38) and Justin (15) Kluivert both hold the attacking role. Devante Cole (19) and his father Andy Cole (43) are in font of goal. Rivaldo (42) and his son Rivaldinho (19) are on the right attacking position.