Remembering the past: Torres and Vidic set to face off each other at the San Siro

When AC Milan will meet Inter Milan this weekend in the much anticipated fixture at the San Siro, old rivalries are set to be re-ignited and not only amongst the two teams, but also between two of it’s players: Nemanja Vidic Vs Fernando Torres, and with both of them reaching the climax of their careers. This match would provide both of them the dose of anxiety they felt, when they used to meet each other in the Barclays Premier League.

During Vidic's days at Manchester United, he was shining as always under the coaching of Sir Alex Ferguson, while former Liverpool striker Fernando Torres was a source of nuisance amongst the English-Serbian defensive partnership of Manchester United.

And if you look back at the 4-1 victory Liverpool rejoiced in Rafa Benetiz’s 2nd last season at the helm, Vidic was all over the place when it came to him defending against Torres. 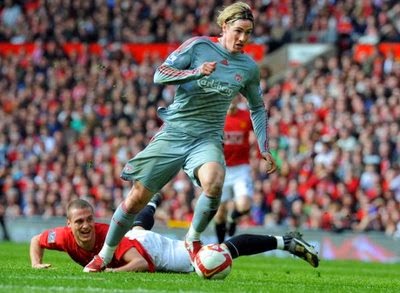 However, fast forward the days and after Torres fateful move to London, some fans will still recogonize the fact how Vidic tore apart Torres when he made a dive claiming for a penalty.

And like good days at the Stamford Bridge were few and far between for Torres, with that goal at Camp Nou as the high-point, his rivalry against Vidic came to a cold as the Spaniard wasn’t able to repeat his antics from those at Anfield days.


So this match, with all of its buildup being focused on the appointment of new manager Roberto Mancini, will provide the English fans a good look up. And like the good old days when both of these stand up together, there will be something special in the Italian Capital this weekend.