Paris Saints Germain and Sweden striker Zlatan Ibrahimovic has finally revealed his dream team. He picked majority of stars who are/were his teammates. Two are from Italy, France and Spain. While from clubs Juventus and Barcelona dominate the list.

Ballon d’Or winner Crisitano Ronaldo fails to get a name in the Zlatan’s eleven.
Also Read: Messi is not even of Ronaldo
Watch the video below. 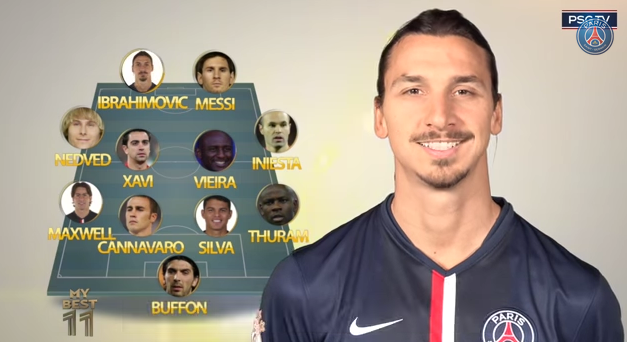 Gianluigi Buffon (Wall)
The Italy and Juventus captain has been in superb form since his start of the career. Currently, he is 36 and still is on top of the clean sheet table in Serie A.

Lilian Thuram (Animal)
Former France international is Zlatan’s favourite right-back. The 42-year-old who made 142 appearances for France played for top clubs like Juventus and Barcelona.

Fabio Cannavaro (Pitbull)
The former Real Madrid star Fabio Cannavaro is named as the other centre-back. He lifted the World Cup trophy for Italy in 2006.

Maxwell (Elegant)
The left-back for Zlatan’s dream team. Maxwell and Ibra both have also played together when they were at Barcelona.

Andrés Iniesta (Magician)
Another Barcelona star who has been named as the Magician. The Spaniard is currently playing his 13th season at the Camp Nou.

Patrick Vieira (Leader)
Former Arsenal captain Vieira is at the heart of the midfield position. Ibrahimovic gave a name Leader to the former France international.

Xavi (Perfect)
The 34-year-old Barcelona veteran has been named as the Perfect one because of his long balls, quality passing and vision.

Pavel Nedvěd (Machine)
Former Juventus star winger Nedvěd who made 91 appearances for Czech Republic is picked up as the left winger.

Lionel Messi (Genius)
Four times Ballon d’Or winner also got his name on this list. The Argentinan has also enjoyed times with Ibrahimovic when he was at Camp Nou.

Zlatan Ibrahimovic (God)
The 33-year-old exceptional striker named himself as the God. He is playing third season at PSG and has scored 83 goals in 94 appearances.