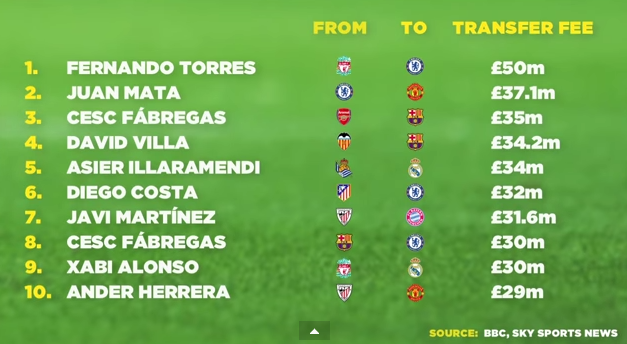 Below are the top 10 expensive Spanish signings.

10. Ander Herrera
The 25-year-old midfielder completed his Manchester United move for a fee of £29million from Athletic Bilbao few months ago.

9. Xabi Alonso
Real Madrid signed him in 2009 from Liverpool for a fee around £30million.

8. Cesc Fabregas
Chelsea boss Jose Mourinho brought him back to Premier League from Barcelona this summer for a £30million fee.

7. Javi Martinez
The 26-year-old holding midfielder made his move to German giants Bayern Munich from Athletic Bilbao for £31.6million transfer fee in 2011.

4. David Villa
Barcelona paid £34.2million to Valencia for the Spaniard in 2010.

3. Cesc Fabregas
Barcelona brought him back to his homeland for a £35million fee from Arsenal in 2010.

1. Fernando Torres
The 30-year-old AC Milan striker made a World Record move as a Spanish player and also the world record domestic move in English football. Chelsea paid £50million to Liverpool for his services.