Real Madrid dominating the list with four big moves out of ten. While Paris Saints Germain and Manchester United are also listed along with Arsenal and Barcelona. arsenal 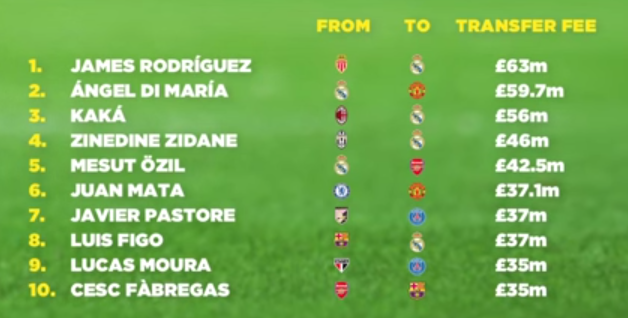 Below are the top ten most expensive midfielders of all time.

10. Cesc Fabregas
Fabregas moved from Arsenal to his boyhood club for a fee of £35million in 2011. Currently, he is playing for the English club Chelsea.

9. Lucas Moura
The Brazilian attacking midfielder was signed by French side Paris Saints German for £35million in 2013 from Brazilian side Sao Paulo.

8. Luis Figo
The Portuguese midfielder announced his retirement in 2009 after playing successful years in Spain. Madrid signed him from local rivals Barcelona for a fee around £37million.

4. Zinedine Zidane
Another former Real Madrid star made a £46million move from Juventus to Santiago Bernabeu back in 2001.

3. Kaka
Kaka completed his £56million from Italian side AC Milan to Real Madrid in 2009.

1. James Rodriguez
After impressing at the World Cup for Colombia, Real Madrid splashed £63million to capture him from Moncao.