Germany have always produced top players. All the top players are playing for top clubs. Below are the top ten expensive German Signings. 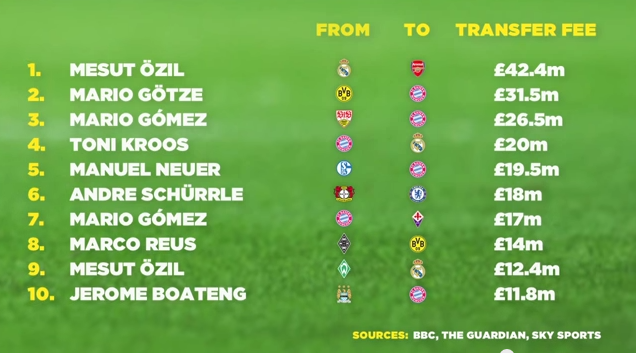 10. Jerome Boateng
The 26-year-old full-back joined Bayern Munich in 2011 from Manchester City. The German side paid £11.8 million to the English side.

8. Marco Reus
The 25-year-old move from Borussia Mönchengladbach to Borussia Dortmund for a £14 million fee in 2012.

7. Mario Gomez
The 29-year-old forward played four seasons at Bayern Munich before moving to the Italian side Fiorentina last summer for a £17 million fee.

5. Manuel Neuer
Schalke 04 received £19.5 million from Bayern for their goalkeeper in 2011. Sicne then he has become one of the best goalkeepers.

4. Toni Kroos
Toni Kroos is the most recent German who moved to a new club. He signed for Real Madrid after impressing at the World Cup. Real paid £20 million to Bayern.


3. Mario Gomez
Bayern paid £26.5 million for the 6ft 2in striker to capture his services from VfB Stuttgart in 2009.

2. Mario Gotze
Mario Gotze who scored the winning goal for Germany in the World Cup final moved from Borussia Dortmund to Bayern Munich for a fee around £31.5 million.

1. Mesut Ozil
Arsenal made a record signing by paying £42.4 million to Real Madrid for Mesut Ozil.