Must Read Arsenal injury list, Walcott tops the list: Arsenal have been a team of injury prone players, currently big players like Olivier Giroud and Mesut Ozil are out for a long time.

Arsenal have been a team of injury prone players, currently big players like Olivier Giroud and Mesut Ozil are out for a long time.


The below chart is brought to you by 101GreatGoals, thanks for sharing this with the Arsenal fans who did not know how difficult times Arsenal boss Arsene Wenger has been serving with his injured players. 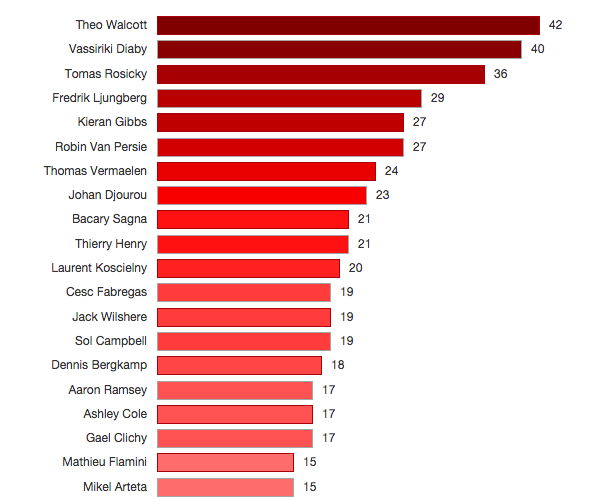 This graph will definitely disturb an Arsenal fan.

Theo Walcott tops the list with 42 injuries since joining Arsenal in 2006. The Englishman is currently preparing for a first team comeback after 10 months. Walcott is followed by Abou Diaby who has suffered 40 injuries since his Arsenal move.

Walcott who is sitting at the top has missed so many games for Arsenal during his prime time, especially the recent injury he suffered in January against Tottenham Hotspurs.

The 25-year-old has recovered and featured on Friday for the under-21 side of the Gunners and played 45 minutes against Blackburn Rovers.

Before his injury he was on top of his form and the Gunners are expecting that his return might bring some good days at Emirates.

Wenger might be planning to give him a bench in a Champions League game against Anderlecht on Wednesday.

What do you think Arsenal fans?
Have your say below.