Who is a better summer signing: Toni Kroos or Ivan Rakitic

Who is a better summer signing: Toni Kroos of Real Madrid or Ivan Rakitic of Barcelona. Chance creation and goals, Passing maestros.

While Fiorentino Perez is known for attracting World Cup super-stars to Real Madrid since the day he presided the Real Madrid board for the first time, it seems that the low key signing of Ivan Rakitic from Sevilla is also bearing fruits for the Catalan Giants. While this Barcelona side is nowhere near to the Greatest Barcelona sides ever, still a clean-sheet laden start of the season with plenty of goals has given the Barcelona board a much needed breathing space after last year’s horrific Neymar scandal and poor showings in LA LIGA as well as in the Champions League. 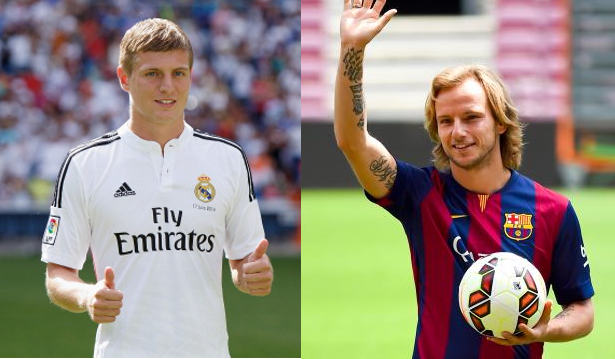 Both Kroos and Rakitic had to fill in the boots of Legends at their respective new clubs. While Kroos had to face the task of man whom he was directly swapping his shirt with – Alonso- Rakitic had to replace Xavi Hernandez which has become a household name in Spain, so let us see how both of them have done their respective jobs

Welcome Notes:
Talking about the day when Real signed Kroos and Barcelona gone with Rakitic, the 10 times Champions League winner introduced the World Cup winner in grand fashion in-front of the media and received much of the money back they paid for Kroos through shirt sales. Barcelona on the other hand gone with mutiny as a rather cold welcome was given to a man whom they claimed as the immediate replacement of Xavi. So as far as the Welcome is concerned, Real Madrid took the glamour world with storm however Barcelona keep their foot on ground.

Passing maestros:
Talking about passing and taking in heed the Barcelona style of play, Ivan Rakitic lags behind in successful passing percentage in comparison with his counter-part at Real Madrid however, with a very small margin. While Rakitic has a passing accuracy of 90% with 57% of those being in the forward direction, Kroos has an astonishingly higher passing percentage as 92% of his passes are met by his team mates with more than 75% of them being in the forward direction. But if you keep in mind style of Real Madrid and compare it with that of Barcelona there should be nothing to hold Real Madrid players from passing more aggressively.

Chance creation and goals:
While the Croatian was in the form of his life against Granada with a goal to his name, he had already scored 2 goals and considering the position he plays in a hole behind Iniesta, this has been a remarkable start for the former Sevilla man whose role is to pass and anchor the play more.

In comparison to the above and as Real Madrid have already scored 25 times this season, only 3 of them had a direct involvement of the World Cup winner. But like Rakitic he has Modric at his front so 3 assists from that deep lying role have to be applauded.

In terms of chance creation, only Lionel Messi has created more than the Croatian Rakitic who has created 6 chances in as many games for Barcelona. Toni Kroos on the other hand seems to be benefitting fully from the type of form Ronaldo is in as the German has created double, 12 chances for Real Madrid so far in the first 6 games of the season.

So even though it’s the start of the season with all left to play, both of the midfield maestros have performed really well so far.