Possible Lineups: Liverpool vs Ludogorets Razgrad (2014/2015). The last time Liverpool played at Anfield was in 2009, they won 1 – 0 against Hungarian club Debrecen.

One of the biggest nights have returned for the Liverpool supporters as the Reds are back in Champions League and will now be playing their first Champions League game almost after five years. While Bulgarian club Ludogorets Razgrad which was established in 2001 are playing UCL for the first time.

On the other side of Group B, Real Madrid will host FC Basel.


TEAM NEWS:
For the home side, Liverpool key man Daniel Sturridge is recovering a thing problem and will back in two weeks.
New boy Emre Can  is out with an ankle injury along with full-backs Glen Johnson, Jon Flanagan and midfielder Joe Allen. Lazar Markovic has to suffer a suspension.
Ludogorets Razgrad have only two players out, Ivan Cvorovic is out with an injury while Vladislav Stoyanov has to suffer a suspension. 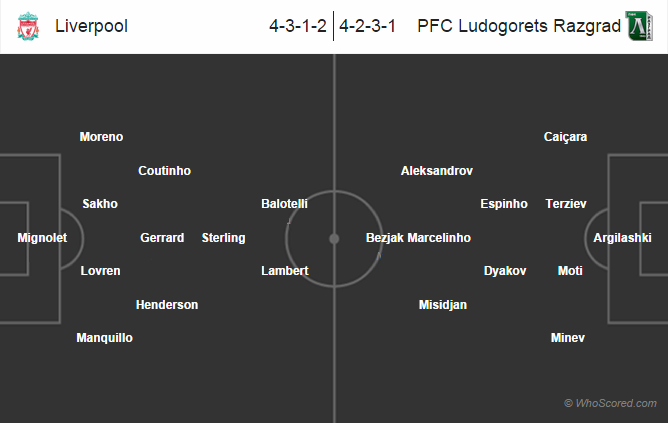 PREDICTION:
Liverpool 3 – 0 Ludogorets Razgrad, after a disappointing weekend for Liverpool, boss Brendan Rodgers will surely be eyeing a big win to give the necessary boost to his squad.