When Liverpool will face Everton in the 223rd Merseyside derby of all time, there would be a chance of redemption, going forward and prove themselves as serious contenders for the top 4 spot for both of the teams. In a rare transfer window that came obviously before the season, both the Liverpool based sides done well - - or seemed to - - and tomorrow will be a test of nerves, as Everton who have been termed as the giant slayers after their performances for the last year will take on a Liverpool side that has been catapulted again by re-building approach.

Last time Everton defeated Liverpool at Anfield was 15 years ago from today in 1999-2000 season.

While history hasn’t repeated itself much to the dismay of Liverpool fans in the Premier League, Everton will be hoping that they put behind their back the demons that have haunted them for so long every-time they visited the L-4 lane at Anfield Road. And they might believe they have the best option in years as a weakened, and probably a dismantled Liverpool side will look to host blues. With 2 defeats in as many games for the reds, a 3rd one might prove to be catastrophic for Liverpool Champions League ambitions next season.

Last time Everton defeated Liverpool was in 2012 season, Since then Liverpool have won 4 drawing 4 as-well.

Injury scares:
While Liverpool have 7 players on the injury list only one of which – Daniel Sturridge- is expected to take some part in this game. Other than that, it has all been doom and gloom for the Merseyside reds as starters like Glen Johnson and Joe Allen won’t be returning any-time soon which means Liverpool have to surrender themselves to the new-born players that came in summer transfer Window at Melwood.

Everton on the other hand have 3 players doubtful for this match only 1 of which, has been ruled out as Ross Barkley is still recovering from his knee ligament injury. Other than that, Seamus Coleman is expected to come back as the defender faces a late fitness test alongside the South African Pienaar who is also doubtful for this match. 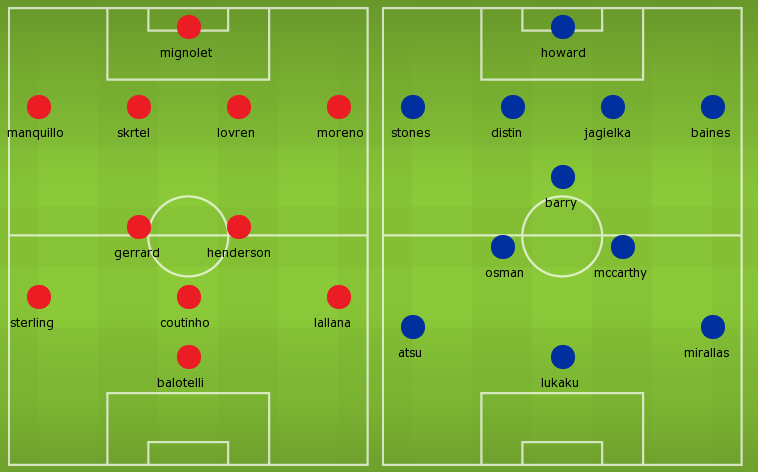