How Liverpool should lineup against Aston Villa

With the worst news of Daniel Sturridge injury for Liverpool club and its supporters, Brendan Rodgers is planning to start to give Adam Lallana his first Premier League.

With the worst news of Daniel Sturridge's injury for Liverpool club and its supporters, Brendan Rodgers is now planning to give Adam Lallana his first Premier League start after being sidelined for almost a month. 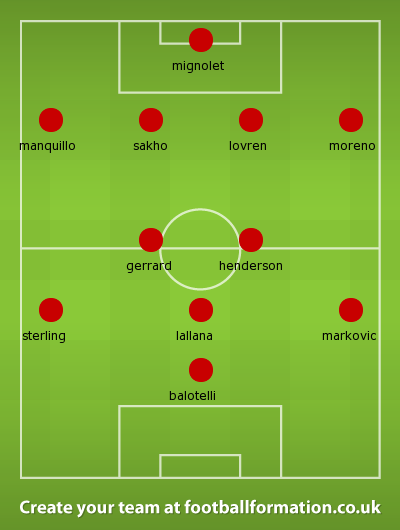 Fabio Borini and Rickie Lambert are also in the queue to replace the injured Englishman who is out for three weeks.

Mario Balotelli is the likely one to start upfront alone with Lallana behind him as a second striker or attacking midfielder.

Philippe Coutinho will once again start from a bench. Young winger Lazar Markovic is also in intentions to be given his first Premier League start for Liverpool.

England teenager Raheem Sterling will surely be in the starting lineup along with skipper Steven Gerrard and Jordon Henderson.

The Defensive line would be same as of last game against Tottenham Hotspurs. On loan right back Javi Manquillo will continue from the right side, Mamadou Sakho and Dejan Lovren will partnership once again at the heart of defence and Alberto Moreno who scored a brilliant goal against Spurs will start from the left.

Simon Mignolet is the definite goalkeeper to start in this lineup.

Anything to change in this lineup?
Have your say below.