Arsenal have won just 1 of the last 6 fixtures against Man City in the Premier League conceding 10 goals in the process.

After seeing off the boring International break flooded with injuries, Premier League would be back and running with a huge fixture as a catalyst. Arsenal will face Manchester City after both the sides struggled in their last match before the International break. Arsenal who have done really well in this transfer window by bringing in the likes of Alexis Sanchez and Danny Welbeck from top quality sides will be looking to see-off a Manchester City side that wrapped their business early in the transfer window and saved themselves from deadline day frenzy. Arsenal, on the other hand had to leave it to the very late as a 16million pound signing of Welbeck put a lid on their summer shopping list.


Arsenal have won just 1 of the last 6 fixtures against Man City in the Premier League conceding 10 goals in the process.

Putting the immediate history into the context, Arsenal started this season with a bang as they smashed apart Manchester City by 3 goals to claim their 2nd trophy in 4 months’ time. But since promising on the week before the Premier League kicked off, Arsenal looked lagging as teams like newly promoted Leicester and high scoring Everton taken their respective tolls. Even they had to dig deep against a Crystal Palace side that are still win-less this season. However with 2 of those 3 fixtures at away grounds, Arsene Wenger might be hopeful that his new looking side can get something from Pelligrini’s men.

Starting from against Manchester City, Arsenal will be facing the likes of Tottenham and Borussia Dortmund in the next 2 weeks.

Like their opponents from the North London, Manchester City will also be kicking off a spell of games that will be testing their nerves and depth very nicely. After playing Arsenal, German Champions Bayern Munich will be awaiting the Premier League Champions in a tough group of UEFA Champions League. Next week they will be playing Jose Mourinho high flying men at home so this fixture list couldn’t have been crueler to test the resolve of the reigning Premier League Champions.

Manchester City next 5 fixtures: Arsenal (away), Bayern Munich (away), Chelsea (Home), Hull (away) and Roma (Home)
Team news:
Manchester City:
Manchester City have 3 players on the sidelines before the start of this match from whom, only Pablo Zabaleta has a chance to make an impact on this match. He is expected to start from the starting 11 while both Stefan Jovetic and Fernando have been ruled out for this match. Jovetic might be a big miss for Manchester City as he was looking quite in form after scoring 2 past last season Premier League runners up Liverpool at the Etihad.

Arsenal:
At the start of this week after the International round was over, five players were doubtful to start in this match however as suggested by recent media reports, only 3 of them have been ruled out with Ramsey and Ozil looking to come back in the starting 11 after simultaneously suffering ankle injuries. The trinity of Giroud, Gnabry and Walcott have been ruled out for long term. 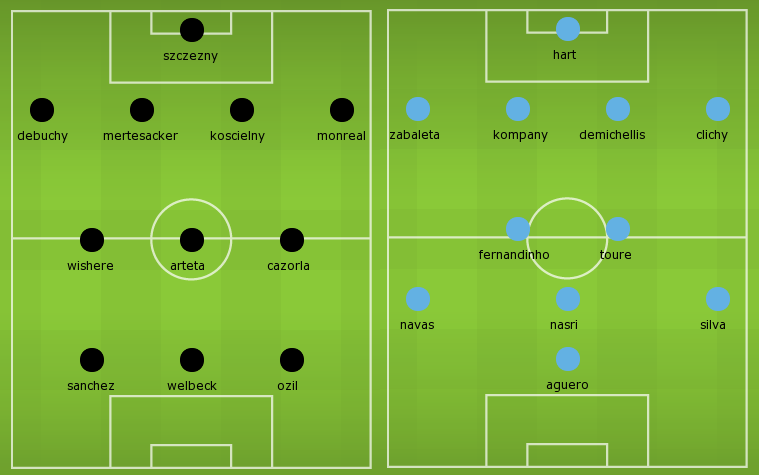