Arsenal Vs Tottenham: Preview, Stats, Lineups, Streams and Prediction! Only two Arsenal players have managed to score a hat-trick with the most latest one coming in 1976.

As Tottenham will travel to the Emirates to take on local rivals Arsenal, one thing that might be kept in mind is that this stadium might become home to the Whites for the 2017-18 season as plans for a new stadium unveil for Tottenham. However since then fateful day, Tottenham will get a heated reception every-time they visit the Arsenal side. On the other hand, Arsenal will have little distraction as Champions League awaits the Gunners after a terrible start of its campaign for them in Germany.

Arsenal have European duties next mid-week which might prove to be a distracting factor today.

Arsenal will look to build upon their win against Aston Villa which was their 1st in the League since the opening fixture against Crystal Palace. After being stunned by Southampton in the Carling cup and with teams like Liverpool, Tottenham and Manchester United sitting right on their shoulders, Arsene Wenger might be expecting his top players to perform which they haven’t against good teams so far this season.

Sitting on 9th in the league with 2 defeats and 2 wins in the opening 5 fixtures, Mauricio Pochettino men have failed to capitalize off their brilliant start to the season. And since it will be 4 years today the Tottenham side last won on the Emirates ground on the Premier League, it will be a much needed boost to the former Southampton manager to soothe his nerves.

Last time Tottenham defeated Arsenal at Emirates was in 2010 when a Gareth Bale led side came back from 2 goals down to defeat the gunners 3-2.

Injuries:
Arsenal have 5 players sidelined none of which is expected to make his return today. Olivier Giroud and Theo Walcott are the pick of players sidelined as the duo suffering foot and knee injuries respectively are out for long. Former Newcastle right back and summer signing Mathieu Debuchy is also out of this fixture as Chambers might take the Frenchman’s place in the Arsenal starting 11.

Tottenham have been dealt a huge injury boost as the trinity of Lamela, Eriksen and former Arsenal player Emanuel Adebayor are all expected to make contribution in this match. Eriksen might prove to be the difference as the Danish play-maker impressed before suffering injury earlier in the season. Other than that, only absentee for Tottenham is Kyle Walker as the Englishman has been out for long term with no return date in sight. 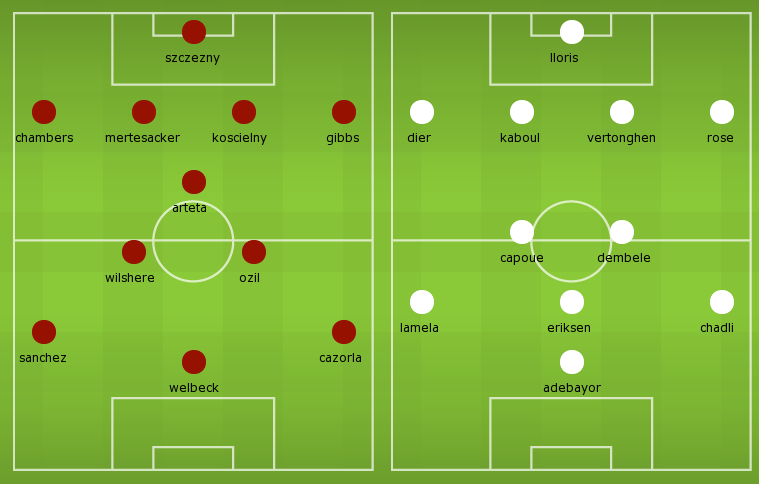 
Prediction:
Arsenal to nick it through 2-1.