Now Transfer Window is closed and Arsenal are all set to go with this squad for atlesat till the New Year. Here is the best possible lineup that Arsene Wenger should go neglecting the current injuries.


With these new signings and a return of some injured players like Theo Walcott and Mikel Arteta who suffered an injury few weeks ago is also set to make his return, Wenger is finally set to pick the best squad.

Olivier Giroud is currently the man out injured for a long time but still he might not get a start if Welbeck’s shines in his absence.

Below is the best possible lineup with Sanchez on the left and Walcott on the right. Giroud’s arrival might take Welbeck’s role but currently Giroud is a long term injury.
Few changes which can me made are: Sanchez might start upfront along with Welbeck or from other side of the flank. 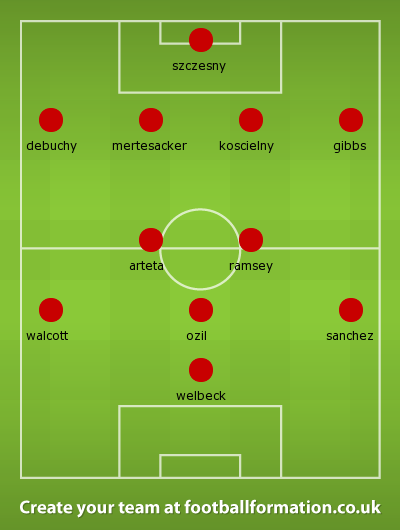 Santi Cazorla, Jack Wilshere and Lukas Podolski all these talents on the bench, Arsenal can fight for the title with this squad despite not starting their new Premier League campaign on high.

Do you agree?
Have your say below.