After making a perfect end to the Pre-Season with a Community Shield trophy making way towards the Emirates Stadium, Arsenal are now looking to make a perfect start to their Premier League campaign with a home game against Crystal Palace. While Crystal Palace was the Owner of Manager of the Season Award Winner in Tony Pulis last season, the former Stoker Boss has parted company with them in an un-seen turn of events. As a result when the Gunners will face relatively weakened Eagles at the Emirates on Saturday at the opening day of the league.

Team News:
Arsenal:
Free from any injuries till the community shield final, Arsenal may now look towards the bench as the defender Laurent Koscielny is doubtful of the clash after suffering Achilles Injury. Apart from that Arsenal are without any injury scares.
Talking about the World Cup and historic Germany campaign led by 3 gunners, all Mesut Ozil, Per Mertesacker and Lukas Podolski are un-able to feature in the match as they are returning to full fitness after joining the Gunners’ ranks of late.

Crystal Palace:
For the Eagles, they will be fresh from the storm as Tony Pulis has left just hours after the signing of Liverpool defender Martin Kelly although there can be no contact between both set of events.
Jonathan Williams has been ruled out of the fixture as he suffered a thigh injury during the pre-season and his absence might be of long term.
Damien Delaney and Adrian Mariappa are also doubtful for this match as the duo have been a victim of knock and rib injuries respectively. 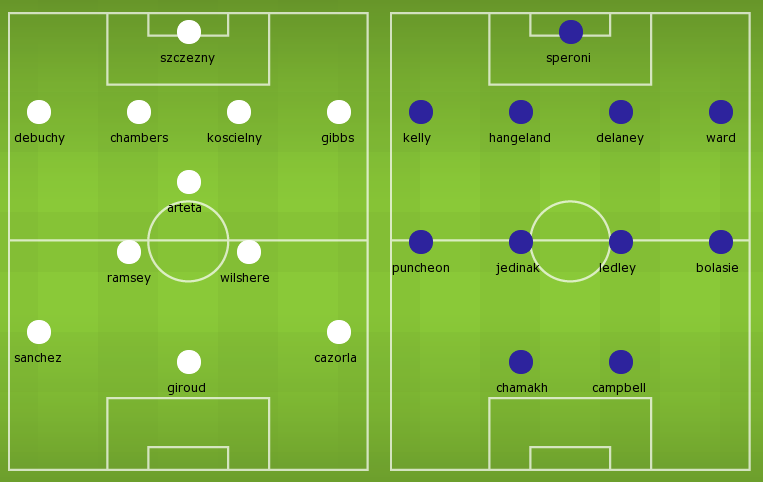 Prediction:
Arsenal to win the match 2-0 and start the season in style.