World Cup Preview: Brazil Vs Netherlands: Both these teams have met 4 time in the World Cup history with both of them standing side by side with 2 wins each.

A battle to regain lost pride, this is the match which can cool down the nerves as far as Brazilians are concerned. Having been tipped as the front runners for the trophy, both the teams feel short and now maybe looking for some face saving before returning home. In a clash that is meaningless to many as the actual prize is a distant memory, both the teams will be looking for some pride restored. Netherlands are maybe facing less criticism back home than their opponents in this clash as the Brazilians were outclassed in one of the most intriguing fixtures in the World Cup history.


Netherlands:
Having put the penalty misery aside and the recent storm regarding Van Gaal's comments that two of the Dutch players refused to take the 1st penalty, the Dutch squad might be looking to bid farewell to their manager and the senior players who might not be playing the next World Cup Dirk Kuyt and probably Wesley Sneijder as the former Liverpool and Real Madrid players respectively maybe kicking the ball last time in a World Cup history.

Having said that, he also claimed that he wants to remain unbeaten in the tournament as he claimed Argentina semi-final isn’t a loss since his side was level after 120 minutes of football. Being famous world-wide for his tactics, the next Manchester United manager will be looking to end on a high.

Netherlands are the most successful team in World Cup history that hasn’t won it yet. They have reached three finals winning none.

Brazil:
Shambolic, disastrous or agonizing, these three words might describe the situation the whole Brazil team will find themselves when they will face the Dutch side. After conceding goals in the whole tournament before ultimately facing the grim reaper in Germany who put 5 beside Brazil in a matter of 20 minutes, confidence might be the only term the Brazil team might be lacking against a well place Netherlands side.

Both these teams have met 4 time in the World Cup history with both of them standing side by side with 2 wins each.

With reports surrounding media outlet that the coach Luiz Felipe Scolari is to be sacked after today’s match and the comments offered by the Neymar agent adding fuel to fire, the former Chelsea manager will be looking to do the same as planned by his counterpart in Dutch side. However contrary to the future of Van Gaal which is well and truly in red half of Manchester, the Brazilian’s future is uncertain following this World Cup. However as his brave and rather naive approach of playing young talent ahead the likes of Lucas Moura and Philippe Coutinho suggests, the Brazilian manager deserve one last standing ovation from his players.

After Neymar, Marcello has created the most number of chances in the Brazilian team indicating the flaws in midfield. 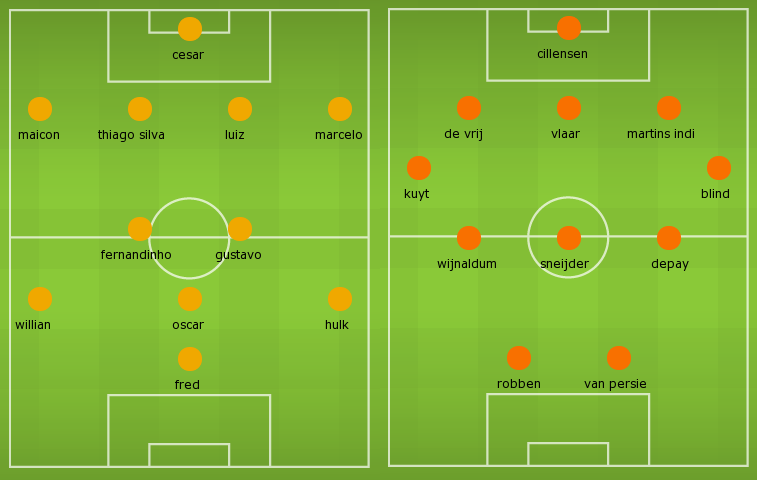