Netherlands and Argentina have met 4 times in World Cup history. The Dutch have the upper hand with 2 wins while the South American side managed to get only 1.

Argentina:
With Di Maria out due to injury, burden will be on Messi once again to lift his nation. Although Messi is the name used to terrorize the opponents, the Argentinians have much more in their Arsenal in the shape of Aguero and Higuain. Aguero who was a doubt due to thigh injury will be available for selection and in the absence of Di Maria, he might well get the nod.

Argentina have lost just one of their last 16 World Cup games.

Man to watch:
It had to be Messi as the Barcelona forward has carried his team in the right direction since putting on the captain’s armband. By scoring 4 goals and creating 1 for his team mates, Messi has carried his nation out of the danger zone many a times in this World Cup. In the absence of Angel DI Maria, Messi may well have to play the role of the creator as well as the finisher and in such an important match in his International career, the Barca man could come up with his magic.

Netherlands:
According to various media outlets, Robin Van Persie is a doubt for this match as he continues his fight against the upset stomach. However the Dutch team could be boosted by the fact that both Le Roy Fer and Ron Vlaar took part in training as well as Nigel De Jong who was expected to be out of the world cup after carrying an injury in the group stage win over Mexico.

Netherlands are the most successful team in the history of World Cup not to win it. They have reached 3 finals winning none.

Man to watch:
Arjen Robben is certainly the man to avoid for the Argentinians if they want to avoid defeat. The way the Bayern Munich player has terrorized defenses with his scintillating runs on and off the ball has been majestic. Starting by a goal that demolished the reigning World Champions Spain in the World Cup opening match of both teams, Robben hasn’t looked back as he scored 3 and assisted 1 goal so far in the tournament. 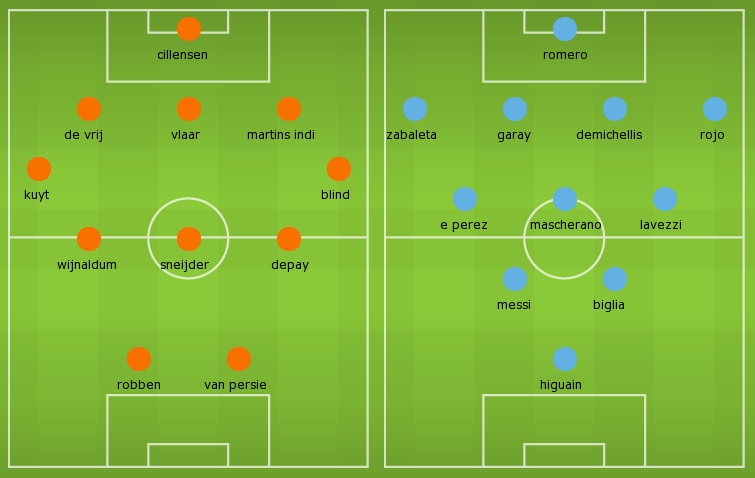