They say he laughs best who laughs last and this is the best chance for the two golden generations to save themselves from the monster that is defeat. Both sides are studded with players that have won many awards but nothing near to this elite trophy. Having said that, players from either of these sides have the chance of lifetime to see their names in gold embossed letters if they manage to see this match through. On the other hand, several sleepless nights might followed with what could have been and what has gone wrong notions could terrorize the 2nd best team in the competition for days to come.

Argentina and Germany both have made it to the finals defeat-less but this is not one single comparison that draws them closer. The last time Germany won the World Cup: it was against the South American side in which an 85th minute penalty inflicted misery upon the Argentinians. On the other hand, the last World Cup in which the South American side lifted the trophy was also against the German side albeit West Germany, when the Diego Maradona led Argentinian side defeated the Germans. So when they say that the world is round, they MEAN it.

Germany:
After getting one of the most resounding victories in the world cup history, the Germans should keep their feet on ground as the most important stage has arrived. Having knocked out 2 South American teams already in the shape of Portugal and Brazil, a 3rd win will create history as far as the Germans are concerned. Having already scored 17 goals in 6 matches so far this tournament, the Germans are as near to the World Cup trophy as they were in the past 24 years. Having been on the wrong side after the World Cup in 2002, the Germans might feel that 12 years wait should prove fruitful for the team that has already created history.

Germany have reached 4 successive World Cup Semi-finals in the past 4 competitions thus proving to be the most consistent team by far.

The Germans are far from a one man team as they have eight goal scorers in their ranks in this World Cup this indicating the versatility Joachim Loew has at his disposal. Having termed as golden generation by many, the Germans have fulfilled the expectations so far as they were the only surviving team of the 2nd most dangerous group in this World Cup. Apart from their attacking, it is their defense that has proved to be fruitful with the ever glaring personality of Manuel Neuer at the top.

Germany have conceded only 4 goals in the World Cup so far in 6 matches.

Argentina:
Having had a name Messi in their team which was echoing all around the streets back home, the South American side they are more than a one man team when it came to the most knockout stages. Starting from the Pre Quarters, the Barcelona man has failed to score on all three occasions however his team mates stepped up to the task dismissing the notion of a one man team.

Germany and Argentina have met 20 times so far, with Argentina leading the claim with 9 wins.

Playing in Brazil against the team that has knocked the host nation out, the Argentinians might have thought of some home crowd support. However it is the exact opposite as majority of the Brazilian fans are supporting Germany in this finale. Having enjoyed a bitter rivalry with the 5 time World Champions, the Argentina side may get the welcome of a villain when they will face the German side in Estádio Maracanã, Rio de Janeiro.

Sergio Romero has kept the most number of clean sheets so far in this tournament (4).

Having kept the most number of clean sheets so far in this tournament conceding just 3 goals 1 less than what their opposition has conceded, Sergio Romero is the un-expected hero of this World Cup along with the Argentinian defense. On the other hand Angel Di Maria is expected to be on bench after he limped off training 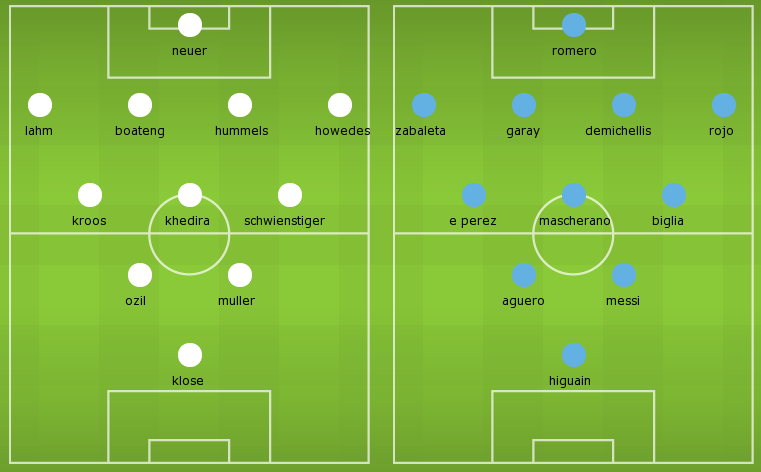 Prediction:
Germany to nick it.