Possible starting lineup of Chelsea next season: new signings Cesc Fabregas, Diego Costa and Drogba who is set to return are all discussed.

At a time when Arsene Wenger was busy at Brazil beaches, Brendan Rodgers was dealing with inevitable task of the departure of Luis Suarez and Man United were looking for their new manager to return after the World Cup, Jose Mourinho was busy in some summer shopping. Having spent a total of nearly 75million pounds on the likes of Cesc Fabregas, Diego Costa and Filipe Luis, it seems that the Chelsea boss is done barring some minor changes regarding the summer transfer business.


Attack:
According to Opta, having got the most number of shots attempted last season, there was no short of firepower as far as the Chelsea starting lineup was concerned. However it was the number of goals scored where this Chelsea team drops to 3rd which was off-course their position in the Barclays Premier League last season. Therefore, with the likes of Diego Costa and Cesc Fabregas coming to the Stamford Bridge, Chelsea wanted to make sure that the problems of less goals will be addressed next season by a good chance conversion.

Here is the comparison of Chelsea with Liverpool and Man City last season:-

If you look at the stats mentioned above, one thing is for clear that the Chelsea midfield did not perform short of expectations last season. Instead they created more chances than Liverpool however it was their chance conversion percentage where they lagged behind the winners and the runners up. So, by signing Diego Costa and and a return of Didier Drogba at the Stamford Bridge, this problem might be solved for Chelsea next season.

Probable starting lineup:
With Oscar driving criticism from Mourinho towards the end of last season and Cesc Fabregas making his way into the ranks, it is expected that the Brazilian will make way for the Spanish. For a team who has the best defensive record last season in the league, a change in the defense seems unlikely however with the arrival of Felipe Luis, it is expected that Azpilicueta will shift onto the left with Ivanovic going out. 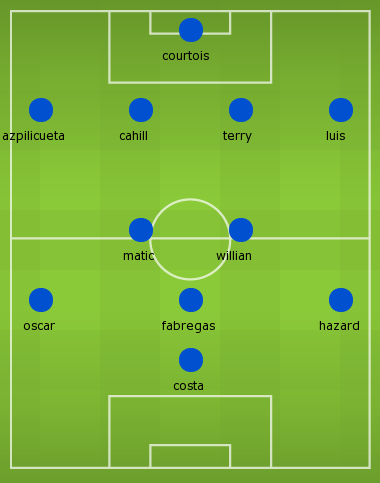