Today, it will be the first quarter final of the World Cup that will be played between two continents that is South America and Europe.


Argentina and Belgium, who both are unbeaten in this World Cup will have to prove their worth today. Lionel Messi exceptional performances throughout the World Cup have taken Argentina to another level while Belgium’s star player Eden Hazard is still finding his peak.


TEAM NEWS:
Manchester City striker Sergio Aguero is back in action but still is unlikey to start while full-back Marcos Rojo is suspended for a game, Jose Basanta might be his replacement.

Meanwhile for Belgium, midfielder Steven Defour is back from a suspension along with Arsenal defender Thomas Vermaelen who has recovered from a hamstring injury. 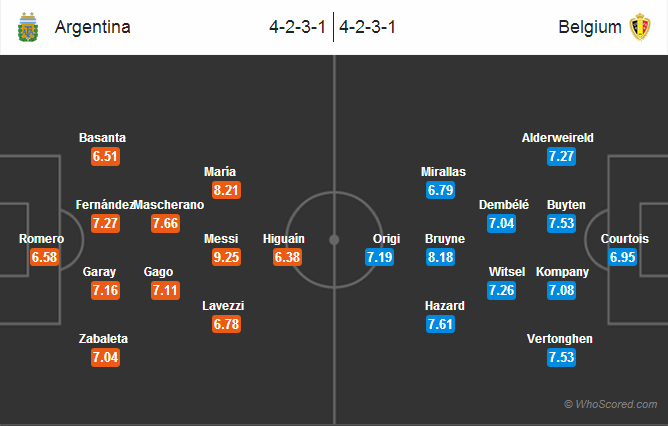 Lionel Messi (Argentina)
Messi who is one of the best player of this World Cup so far is the key man to watch in this game. He has scored four goals and set up one assist. Four times Ballon d’or winner has won the man of the match award in every game. Messi need three goals to beat James Rodriguez of Colombia who was knocked out yesterday but still on top of the goal scoring chart.

PREDICTION:
Argentina 1 – 2 Belgium, Messi and Lukaku on the scoresheet.